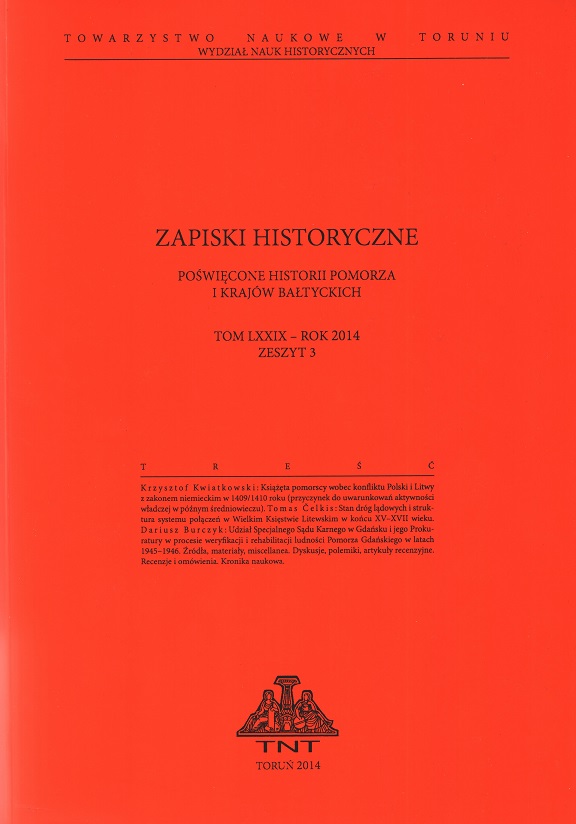 Zapiski Historyczne (English: Historical Records) is one of the oldest Polish historical journals. Ever since its inception in 1908 it has been published by the Society of Arts and Sciences in Toruń (Polish: Towarzystwo Naukowe w Toruniu), one of the most important Polish scientific and scholarly organizations in the territory of the Prussian partition. Initially, up until 1955, the title of the journal was Zapiski Towarzystwa Naukowego w Toruniu (English: Historical Records of the Society of Arts and Sciences in Toruń). Along with the change of the title came the change of the scholarly profile – from being a local periodical Zapiski Historyczne turned into a relevant scholarly journal with an increasingly wide international acclaim. This is mainly attributed to the activity of professor Marian Biskup, who was the editor of Zapiski Historyczne from 1958 to 2003. It was during this period that authors from all major Polish academic centres, and also increasingly more foreign authors, most notably from Germany and Scandinavia, started to publish in Zapiski. Since the 1960s, the journal has also been publishing texts by authors from the Baltic countries: Lithuania, Latvia and Estonia, then Soviet republics, as well as from Russia. This enabled the dissemination of their achievements on an international level. At present, the Society of Arts and Sciences in Toruń publishes the journal in partnership with the Faculty of History of Nicolaus Copernicus University in Toruń. At present, Zapiski Historyczne continues the model developed in the second half of the twentieth century. The aim of the journal is to contribute to the development of research on the history of the Baltic region, especially its southern part, and to participate in scholarly discussions related to the history of this region. Geographically, the area of interest encompasses: Northern Germany, including the current federal states of Mecklenburg-Vorpommern, Brandenburg, Schleswig-Holstein, Hamburg (thus, the lands of the former Kingdom of Prussia and the area of activity of the Hansa), Northern Poland (Pomerania, the region of the Vistula estuary, Northern Greater Poland and Northern Mazovia), former East Prussia (Warmia and Masuria, Russian Kaliningrad Oblast), the Baltic states (Lithuania, Latvia and Estonia), including the historical territory of the Grand Duchy of Lithuania after 1569, the lands of Northwest Russia, as well as Scandinavian countries (Denmark, Norway, Sweden and Finland). The texts published in Zapiski Historyczne embrace the whole chronological scope of the history of the Baltic region suitable for historical studies, that is, the period from approximately the first millennium A.D. to the most recent times. The scope of scholarly disciplines broached in the texts ranges from history, to archaeology, to art history and other fields of research on the past. The journal publishes about 30 texts each year, including original scholarly articles, review articles and source editions. Zapiski Historyczne also provides a platform for scholarly discourse, by publishing discussion articles and book reviews dedicated to publications on the history of the Baltic region. The international character of the journal is determined, on the one hand, by the articles published by foreign authors and, on the other hand, by the presentation of the achievements of Polish researchers in English and German through special thematic issues, published at least once a year. Zapiski Historyczne publishes works in Polish, English and German. Regardless of the language of publication, each scholarly article is provided with full metadata in English in order to make it easier for foreign readers to find it on the Internet. The journal welcomes publications from researchers on all stages of academic career, both scholars affiliated at academic institutions and independent researchers, whose texts have a proven scholarly value.