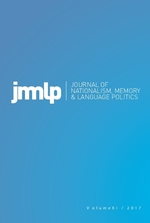 Journal of Nationalism, Memory & Language Politics is a peer-reviewed journal published by De Gruyter on behalf of the Charles University.

Journal of Nationalism, Memory & Language Politics follows the publication of the journal ALPPI Annual of Language & Politics and Politics of Identity.

It is committed to exploring divergent scholarly opinions, research and theories of current international academic experts, and is a forum for discussion and hopes to encourage free-thinking and debate among academics, young researchers and professionals over issues of importance to the politics of identity and memory as well as the political dimensions of language policy in the 20th and 21st centuries.

We encourage research articles that employ qualitative or quantitative methodologies as well as empirical historical analyses regarding, but not limited to, the following issues:

While our focus is on empirical articles, our scope remains open to exceptional theoretical works (especially if they incorporate empirical research), book reviews and translations.