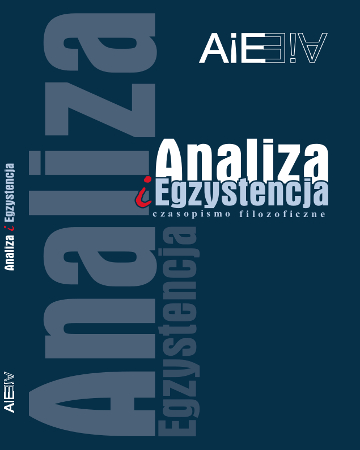 The title of the journal „Analiza i Egzystencja” (Analysis and Existence) indicates two well known trends in recent philosophy and also two different ways of doing philosophy. In 2003 one hundred years passed since „The Principles of Mathematics” by B. Russell and „Principia Ethica” by G.E. Moore were first published – the two books which gave rise to contemporary analytic philosophy. In spite of criticism and transformation, analytic philosophy is an intellectual movement that unites lots of living philosophers, especially those who perceive philosophy as a reliable and rigorous discipline, similar to empirical sciences. The word „existence” refers to the trend called existentialism, with Martin Heidegger and Jean-Paul Sartre as its best exponents. Although less permanent than analytic philosophy, existentialism has left a lot of successors: hermeneutics, dialogue philosophy and postmodernism. What all of them have in common is the idea that philosophy is closer to literature rather than empirical sciences. Philosophy is conceived here as an art of expressing those aspects of human existence which resist explanation in scientific terms.

Ignoring the intricacy of history we can recognize two conceptions as well as two different ways of doing philosophy – the scientific, symbolized by „analysis”, and the literary, symbolized by „existence”. The first method is based on the analysis of concepts and examination of arguments and does not appeal to emotions. The other uses a metaphorical language to describe the mysterious complexity of human existence and in doing so it does appeal to our feelings. In both methods reliability and understanding a human being, respectively, are the most important aims. Both methods have their weaknesses as well: whereas philosophical analysis cannot express the mysterious aspects of existence, the philosophy of existence is far from being as rigourous as science.

Philosophy is a research oriented activity. It differs from empirical sciences to the extent that it addresses empirically unsolvable issues and it differs form religion to the extent that it is impartial. You can say that the social role of philosophy lies in addressing existential problems (i.e. problems which are empirically unsolvable but which have at the same time great significance to mankind) in a reliable and impartial way. Although these problems are expressed by artists and answers to them are given by our religions, the desire for truth and certainty pushes us to investigate them as closely to science as possible.

For ages philosophical thought has been preoccupied by existential problems, such as hopelessness, incongruity or death. Examining them in a reliable way starts with the analysis of the meaning of words, such as „existence” and „nonentity”, „awareness” and „matter”, „truth” and „falsity”, „certainty” and „doubtlessness”, „good” and „evil”. „Analysis and Existence” is meant to be a pluralistic forum. We invite the cooperation of both Polish and foreign philosophers, the ones who address existential problems as well as those who emphasize the role of analysis and argumentation (as preparing some basis for metaphysical intuitions). Our ideal is philosophy with maximum reliability and one that undertakes important existential issues.