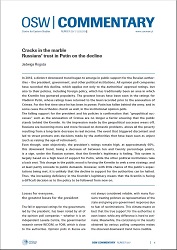 Author(s): Jadwiga Rogoża
Subject(s): Politics, Civil Society, Governance
Published by: Ośrodek Studiów Wschodnich im. Marka Karpia
Keywords: Regime popularity in Russia; Putin's ratings; Kremlin’s legitimacy ;
Summary/Abstract: In 2018, a distinct downward trend began to emerge in public support for the Russian authorities – the president, government, and other political institutions. All opinion poll companies have recorded this decline, which applies not only to the authorities’ approval ratings, but also to their policies, including foreign policy, which has traditionally been an area in which the Kremlin has garnered popularity. The greatest losses have been seen in the ratings for Vladimir Putin, whose ratings have returned to the level recorded prior to the annexation of Crimea. For the first time since he has been in power, Putin has fallen behind the army, and in some cases the orthodox church as well, in the institutional opinion polls. || The falling support for the president and his policies is confirmation that “geopolitical successes” such as the annexation of Crimea are no longer a factor ensuring that the public stands behind the Kremlin. As the impression made by the geopolitical successes wears off, Russians are becoming more and more focused on domestic problems, above all the poverty resulting from a long-term decrease in real income. The event that triggered discontent and led to street protests was decisions made by the authorities that have been seen as unjust (such as raising the age of retirement). || Even though, seen objectively, the president’s ratings remain high, at approximately 60%, this downward trend, being a decrease of between ten and twenty percentage points, is a sign, under the Russian system, that the Kremlin’s legitimacy is fading. This system is largely based on a high level of support for Putin, while the other political institutions take a back seat. This change in the public mood is forcing the Kremlin to seek a new strategy, and at least partly concede to public demands. However, with little chance of the public’s expectations being met, it is unlikely that the decline in support for the authorities can be halted. Thus, the increasing deficiency in the Kremlin’s legitimacy means that the Kremlin is facing a difficult decision as to the policy to be followed from now on.