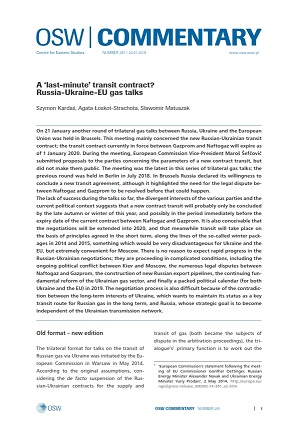 Author(s): Szymon Kardaś, Agata Loskot-Strachota, Sławomir Matuszak
Contributor(s): Jim Todd (Translator)
Subject(s): Supranational / Global Economy, Environmental and Energy policy, International relations/trade, Geopolitics, Transport / Logistics
Published by: Ośrodek Studiów Wschodnich im. Marka Karpia
Keywords: Russia; Ukraine; European Union; gas transit; trilateral cooperation; transit contract; gas pipeline; transit route;
Summary/Abstract: On 21 January another round of trilateral gas talks between Russia, Ukraine and the European Union was held in Brussels. This meeting mainly concerned the new Russian-Ukrainian transit contract; the transit contract currently in force between Gazprom and Naftogaz will expire as of 1 January 2020. During the meeting, European Commission Vice-President Maroš Šefčovič submitted proposals to the parties concerning the parameters of a new contract transit, but did not make them public. The meeting was the latest in this series of trilateral gas talks; the previous round was held in Berlin in July 2018. In Brussels Russia declared its willingness to conclude a new transit agreement, although it highlighted the need for the legal dispute between Naftogaz and Gazprom to be resolved before that could happen. The lack of success during the talks so far, the divergent interests of the various parties and the current political context suggests that a new contract transit will probably only be concluded by the late autumn or winter of this year, and possibly in the period immediately before the expiry date of the current contract between Naftogaz and Gazprom. It is also conceivable that the negotiations will be extended into 2020, and that meanwhile transit will take place on the basis of principles agreed in the short term, along the lines of the so-called winter packages in 2014 and 2015, something which would be very disadvantageous for Ukraine and the EU, but extremely convenient for Moscow. There is no reason to expect rapid progress in the Russian-Ukrainian negotiations; they are proceeding in complicated conditions, including the ongoing political conflict between Kiev and Moscow, the numerous legal disputes between Naftogaz and Gazprom, the construction of new Russian export pipelines, the continuing fundamental reform of the Ukrainian gas sector, and finally a packed political calendar (for both Ukraine and the EU) in 2019. The negotiation process is also difficult because of the contradiction between the long-term interests of Ukraine, which wants to maintain its status as a key transit route for Russian gas in the long term, and Russia, whose strategic goal is to become independent of the Ukrainian transmission network.