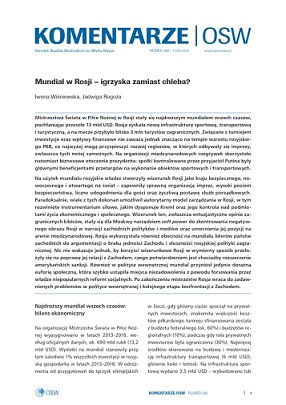 Author(s): Iwona Wiśniewska, Jadwiga Rogoża
Subject(s): Governance, International relations/trade, Economic development, Sports Studies, Tourism, Socio-Economic Research
Published by: Ośrodek Studiów Wschodnich im. Marka Karpia
Keywords: 2018 FIFA World Cup; Mundial; Russia; sports; tourism; hosting World Cup events; economic assessment;
Summary/Abstract: For the purposes of the World Cup, the Russian leadership created an image of Russia as a country that is safe, modern and open to the world: they made sure that the organisation of sports events was efficient, security was guaranteed, visitors had various conveniences at their disposal and that the attitude of law enforcement officers towards them was friendly. Paradoxically, the implementation of many of these arrangements was facilitated by Russia’s authoritarian model of governance, including a comprehensive law enforcement system the Kremlin has at its disposal and the state’s control of the key groups involved. Moscow has used this image, especially by including the enthusiastic opinions voiced by foreign football fans, as one of its soft power tools to contradict the negative image of Russia present in the narrative supported by Western politicians and media, and to solidify Russia’s position in the international arena. Moreover, Russia has used the presence of leaders from Western states, who attended various World Cup matches, to bolster its narrative emphasising the absence of unity among Western states and the rightfulness of Russia’s foreign policy stance. However, there is no indication that Russia’s improved image could have a measurable impact on the betterment of its relations with the West, which is confirmed, for example, by the extension of US-imposed sanctions. Similarly, in domestic politics the World Cup merely brought a temporary wave of enthusiasm within society that quickly subsided, giving way to social discontent triggered by the government pushing through unpopular social reforms. The World Cup is now over and Russia is returning to its inveterate domestic problems and moving to another phase of its confrontation with the West.