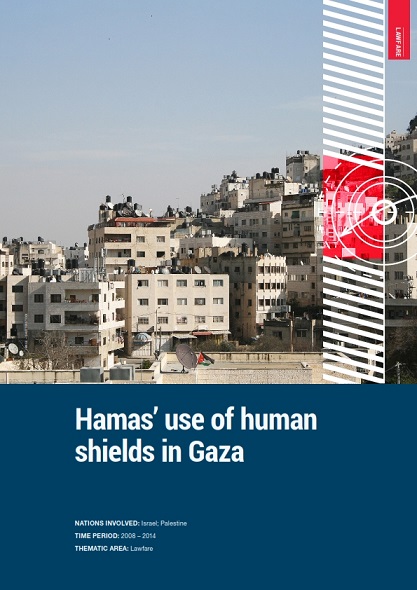 Author(s): Specified No Author
Subject(s): Criminal Law, International Law, Human Rights and Humanitarian Law, Civil Society, Government/Political systems, Criminology, Victimology, Peace and Conflict Studies
Published by: NATO Strategic Communications Centre of Excellence
Keywords: Hamas; Islamist militant group; Gaza Strip; human shields; conflict; civilians; war crimes; civilian casualties; Israel;
Summary/Abstract: Hamas, an Islamist militant group and the de facto governing authority of the Gaza Strip, has been using human shields in conflicts with Israel since 2007. According to the Statute of the International Criminal Court (ICC), the war crime of using human shields encompasses “utilizing the presence of a civilian or other protected person to render certain points, areas, or military forces immune from military operations.” Hamas has launched rockets, positioned military-related infrastructure-hubs and routes, and engaged the Israeli Defense Forces (IDF) from, or in proximity to, residential and commercial areas. The strategic logic of human shields has two components. It is based on an awareness of Israel’s desire to minimise collateral damage, and of Western public opinion’s sensitivity towards civilian casualties. If the IDF uses lethal force and causes an increase in civilian casualties, Hamas can utilise that as a lawfare tool: it can accuse Israel of committing war crimes, which could result in the imposition of a wide array of sanctions. Alternatively, if the IDF limits its use of military force in Gaza to avoid collateral damage, Hamas will be less susceptible to Israeli attacks, and thereby able to protect its assets while continuing to fight. Moreover, despite the Israeli public’s high level of support for the Israeli political and military leadership during operations, civilian casualties are one of the friction points between Israeli left-wing and right-wing supporters, with the former questioning the outcomes of the operation.