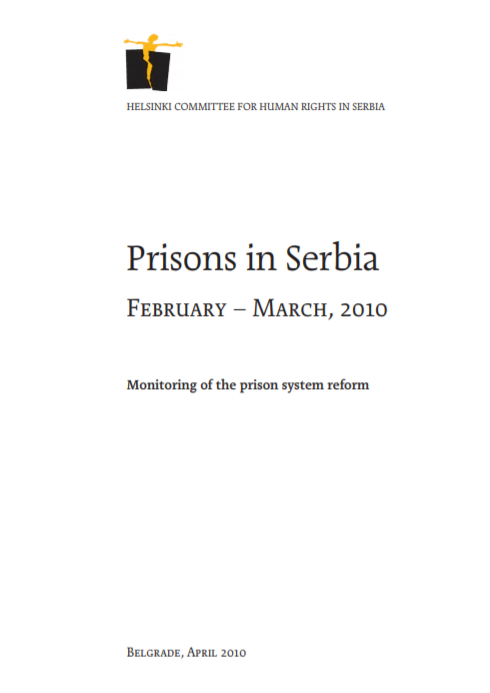 Author(s): Marija Jelić, Gordana Lukić-Samardžija, Ljiljana Palibrk, Ivan Kuzminović
Subject(s): Criminal Law, Human Rights and Humanitarian Law, Security and defense, Social development, Criminology, Studies in violence and power, Health and medicine and law, Present Times (2010 - today), Social Norms / Social Control, Penal Policy
Published by: Helsinški odbor za ljudska prava u Srbiji
Keywords: prisons in Serbia; juvenile reformatory; Valjevo; living conditions; security; legality of treatment; social resettlement; contact with the outside world; institutional personnel; Leskovac; district prison;
Summary/Abstract: As all the earlier reports by the Helsinki Committee for Human Rights in Serbia have been taken as relevant and objective, we used the same, time-tested methodology and scrutinized the same aspects of prison life while monitoring the Juvenile Reformatory in Valjevo and the District Prison in Leskovac. These aspects relate to living conditions (buildings and grounds, sanitary installations and hygiene, equipment, food and healthcare), security, legality of treatment, social resettlement, contact with the outside world and institutional personnel. In our view, these are the dimensions that reflect all the elements of significance for a human rights non-governmental organization. On the other hand, a standardized methodology facilitates detection of most pressing problems on the one hand, and the changes for worse or for better on the other. This summary outlines characteristics of each monitored aspect, whereas detailed observations are presented in the reports below. Living conditions – Overcrowding and changed structure of prison population characterize all detention institutions in Serbia, including the Valjevo Juvenile Reformatory and, in particular, the Leskovac District Prison. Overcrowding plagues not only dormitories but also other premises available to prisoners (living quarters, recreation halls, etc.) Though some investments have been made in the past couple of years – to renovate sanitary installations, repair roofs, etc. – prison facilities are still in very bad shape. General hygiene is far from adequate, mostly due to high fluctuation of prisoners and decayed buildings. Both prisons are also poorly furnished and inadequately equipped with bedclothes, mattresses, etc. The quality of food in the Valjevo institution is adequate and the meals served to prisoners are not uniform. However, this aspect is rather problematic in the Leskovac institution. Milk and milk products, fresh fruits and sweets are rarely on menus in both institutions. Medical services are also better in the juvenile prison. Both institutions, however, are coping with large numbers of prisoners dependent on psychoactive substances. Security – This aspect is in itself problematic in all total institutions. Increased number of prisoners has made the security situation even more complex. Despite the fact that they are the biggest in both prisons, security services are actually understaffed. Various equipment such as metal detectors or video surveillance systems do make it easier for security officers to perform their duties, but cannot compensate other shortcomings. The problem of ‘prison gangs’ that plagues the Valjevo institution is not that serious in the Leskovac one. According to records and interviews, security officers are not assaulted by prisoners but cases of intra-prisoner violence are frequent. Legality of treatment – Objective circumstances in which the two institutions operate more or less result in illegal treatments. Adequate categorization and the respect for law are hardly possible with such large numbers of prisoners, which, in turn, open the door to “legally justified” misconduct. The changed structure of prison population in Valjevo has practically changed the function of this juvenile prison. The situation in the so-called wards under intensified surveillance is questionable in both institutions. Prisoners are still not adequately informed about their rights and duties though circulation of such information is better than before. Consequently, prisoners cannot get proper legal aid, while their grievances are not always processed legally. Suspected corruption and other misconduct are usual in any prison environment – however, the number of initiated proceedings and disciplinary measures taken against officers testify that corruption and misconduct are the realities of these two institutions. Social resettlement – For all the above-mentioned reasons pre-release programs and activities meant to assist prisoners’ reintegration into the outside community are rather inadequate and ineffective. In addition, prison officers in charge or reeducation are not professionally capacitated enough, financial and technical preconditions are bad, system flaws have not been removed yet, and state authorities did little to encourage cooperation between prisons and socioeconomic factors in the outside community. Contact with the outside world – Generally speaking, this is the best aspect in both institutions. Prisoners have no complaints against the communication with the outside community, as provided under the law, or against privileges and benefits dealing with leaves of absence from prison institutions. The interviewed prison officers say their communication with prisoners’ families and relevant governmental institutions was good. However, the team assesses this cooperation as inadequate, too formal and actually inefficient notably when it comes to juveniles. Institutional personnel – With such numbers of prisoners the two institutions cater for, all services are actually understaffed and the officers working for them inadequately qualified for dealing with prison population. Difficult working environments and stressful work conditions, and the presence of corruption and nepotism, negatively affect intra-personnel relations and further complicate the anyway huge problems these institutions have to cope with on everyday basis. As the relations between different services are not clearly defined, responsibility for wrong decisions and inadequate assessments is similarly veiled. Such general climate negatively affects the exercise of prisoners’ rights but also makes manipulation possible for them. For their part, prison officers are also often deprived of many rights, mostly those stemming from labor relations. Both prison institutions are managed by acting directors. Despite good results they have achieved for rather short periods in office, the two will not be appointed directors as they work in this capacity for other prison institutions. Both prisons need to urgently solve the problem of their cadres.