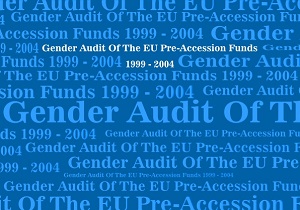 Author(s): Lívia Bíziková, Jarmila Filadelfiová, Alena Králíková, Linda Sokačová
Contributor(s): Roman Piják (Illustrator), Alena Králíková (Editor)
Subject(s): Gender Studies, International relations/trade, Social development, Social differentiation, Family and social welfare, EU-Accession / EU-DEvelopment, Financial Markets, EU-Legislation
Published by: Gender Studies, o. p. s.
Keywords: European Union; EU membership; accession process; financing programmes and projects; pre-accession funds; Structural Funds; gender; gender audit; gender roles; social development; financial support;
Summary/Abstract: Looking back into the closed period of the past could be rewarding and important for future decisions. Obviously, the decisions cannot be taken back but their outcomes may be, and often are, relevant in the following years. When it comes to finances and their division among programmes and projects, it is always interesting to assess the priorities and budgets after a certain distance in time to understand the processes and channels they passed through. The EU membership has opened a lot of new challenges for each of the accession countries. During the accession process, the countries had the possibility to finance institutional building or infrastructure development from the EU pre-accession instruments. After entering the EU, pre-accession instruments were replaced by Structural Funds. Economic impacts of the projects financed by all available instruments were relatively well documented and monitored. The projects had significant positive and negative social impact at national and regional level. Because of existing gender roles and stereotypes, the social “impacts” were not distributed equally between women and men. Moreover, the missing gender dimension on the project level helped conservation and strengthening of gender roles. That is briefly the first intent why the joint Czech and Slovak project was initiated in mid-2004. It focuses on analyses of programming documents, and a selected number of foundations re-granting European funds to local projects in both countries. In our analyses, we tried to follow the whole link from adoption of the EU directive, through preparation of national guidelines, to approved projects at national and regional level. [...]