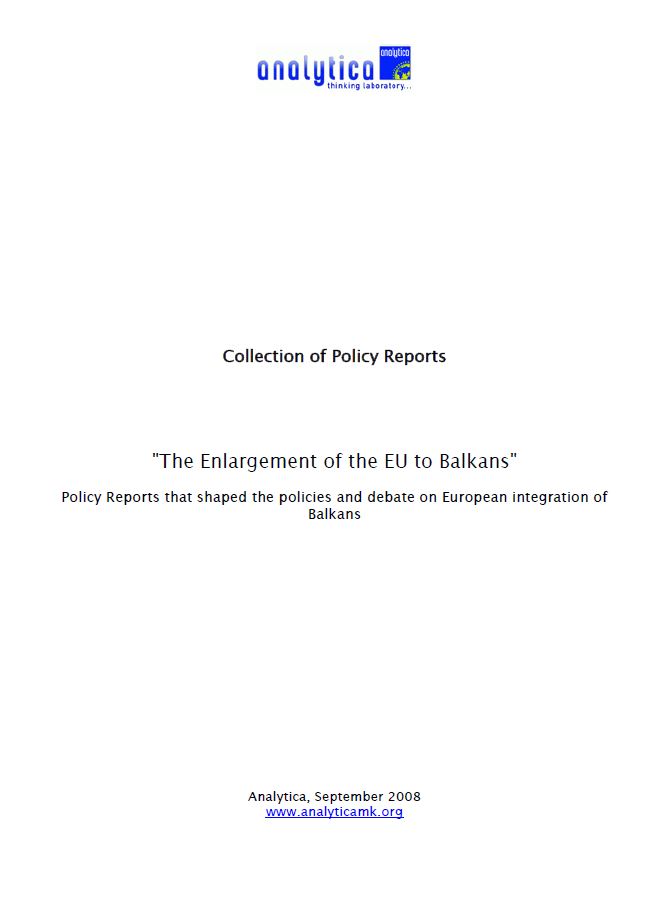 Author(s): Specified No Author
Subject(s): Governance, International relations/trade, Security and defense, Economic development, EU-Accession / EU-DEvelopment
Published by: Analytica
Keywords: Western Balkans; Stabilization and Accession Process; EU integration; European financial assistance; national governments; peace; stability; development; EU policy towards Balkans;
Summary/Abstract: Today, western Balkans states are a long way from where they were at the beginning of the decade. The Stabilization and Association process, which has just started in 2000, is almost completed as all the states have negotiated and signed the Stabilization and Association Agreements with the EU, the EU is negotiating visa liberalization agreements and all states are entitled to the new pre-accession financial assistance IPA, designed to address the strategic needs of the region. This progress, apart from the persistent efforts of the national governments and the EU administration, is also partly due to the visionary policy reports and recommendations of people and organizations working on the Balkans. We are convinced that their commitment to the region and the ability to look beyond the limitations of the immediate political context for lasting solutions makes them an irreplaceable item on every reading-list of both those who wish to study the Balkan region and those who aim to produce similar such reports addressing the present dilemmas and challenges for the western Balkan states. “The Enlargement of the EU to Balkans” is a compilation of four reports on the Balkans published since 2000. They all concern the Balkan region and its prospects for the future – away from violent legacies towards peace, stability and European integration. As such, they are a valuable source for all those interested in and studying the recent political developments in this region, for these reports give an overview of the challenges that Balkans states faced on the start of their journey to European integration. We hope this collection of reports will become part of the curricula of schools and departments where Balkan politics, history and EU integration are taught. From the multitude of reports, books and other works written on the Balkans, the reports that follow were not chosen accidentally. Rather, we aimed to include the most influential reports, those which had the greatest impact on the EU and international community’s approach towards the Balkans, those with the most valuable recommendations concerning the features of EU’s policy towards the Balkans. The results of in-depth field research and analysis of diplomatic relations in the region, these reports provided the most credible assistance to the European and other policy-makers when faced with the dilemma ‘how to deal with postconflict post-Milosevic Balkans?’ By publishing their reports again, we also like to pay tribute to those people and organizations that made their most for Balkans to be found in EU integration map.