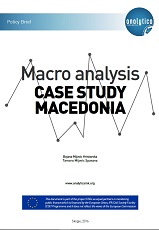 Author(s): Bojana Mijovic Hristovska, Tamara Mijovic Spasova
Subject(s): Economic policy, Economic development, Fiscal Politics / Budgeting, Transport / Logistics
Published by: Аналитика Тинк-тенк Организација
Keywords: Macedonia; economic growth; fiscal policy; credit growth; domestic consumption; macroeconomic stability; public-private partnership; tax justice; transport;
Summary/Abstract: The broad - based GDP growth supported by robust exports and by public investments, improved the macroeconomic outlook of the country. Macroeconomic situation is sound and stable and certainly it is expected to stay on the track in the future. The economic growth was mainly generated by domestic factors, primarily investments and exports. Also, there is a permanent decline in the unemployment rate, as well as slower inflation rate. The fiscal policy continued stimulating and supporting the economic recovery. The support was financed by borrowing, primarily external, thus further increasing the external debt. Economic growth is expected to continue in 2016. The anticipated growth projections are backed by foreign export -oriented investments and public infrastructure investment. Moreover, the stable monetary policy and macro-prudential measures taken by the National bank monetary authority, should improve the credit growth and domestic consumption. However, domestic political uncertainties and the crisis in Greece constitute significant downside risks. The fiscal policy of the Republic of Macedonia is aimed at achieving reasonable balance between strategic goals, preserving macroeconomic stability and encouraging economic activity by increasing the quality of public finances. Public finances, as the other side of the coin of the overall macro policy of the country are certainly very interesting and instigating field for analyzing. In this document, a few of the many aspects of public finances will be shortly elaborated, i. e. public debt, public private partnership, tax justice and public infrastructure. At first, the report gives a legal definition and the main principles of the public debt. According to the Fiscal Strategy, the public debt of the Republic of Macedonia at the end of 2015 amounted to 46.5% of GDP, while the state debt in the same period amounted to 38.0% of GDP. With respect to limits set in the policy for public debt management, it can be concluded that public debt is within the situated limits, having in mind that at the end of the first quarter of 2016 the its value amounted to 45% of GDP, thus it is expected not to exceed 60% of GDP in the long run. However, public debt levels have risen noticeably in recent years. Regarding the other dimension of public finances, the public-private partnership is relatively new topic in the Republic of Macedonia. The new Law on concessions and PPP was adopted in 2012. Over the past years, the only form that was used for PPP projects was the concessions leading to many infrastructure and other public interest projects in the form of concessions, mainly at the state level. The main benefits of putting into law and regulating the PPP are usually for the local self-government, especially for stimulating more intensive use of public-private partnerships in developing infrastructure and public services. Regarding the issue of tax justice there is not a simple national definition used to define the term “Tax justice”. In the beginning of the 90’s, along with the introduction of the new economic system in the Republic of Macedonia, a new fiscal system was introduced based on the principles of market economy, private property, independence of the economic subject, etc. New principle which was incorporated in the current fiscal system of the Republic of Macedonia was the principle of allocated neutrality of taxes and the budget according to which, with the instruments of the fiscal policy some sectors would not be stimulated and supported. Public infrastructure investments present the development component of the fiscal policy with intent for improving the economic perspectives and quality of life of the citizens. The crucial objective of this type of investment is to advance the transportation network in the country (highways, railroad tracks, regional and local roads), as well as to improve the energy and utilities infrastructure, the educational, social and health systems. These capital investments, in addition to the recent positive effect on the economic activity, also contribute for strengthening and boosting the competitiveness of the country in the long term period, thus being of key importance for increasing productivity and production.