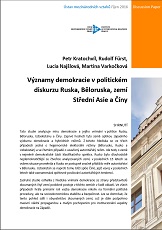 Author(s): Petr Kratochvíl, Rudolf Fürst, Lucia Najšlová, Martina Varkočková
Subject(s): Government/Political systems, International relations/trade, Electoral systems
Published by: Ústav mezinárodních vztahů
Keywords: Democracy in Russia; Democracy in Belarus; Democracy in Uzbekistan; democracy in China; Democracy in Central Asia;
Summary/Abstract: This study analyzes the level of democracy and its perception in the policies of Russia, Belarus, Uzbekistan and China. First, they assess these countries with the optics of Western research into democracy and hybrid regimes. From this point of view, in three cases, hegemonic electoral regimes (Belarus, Russia and Uzbekistan) and in the fourth case the closed authoritarian regime. It is therefore the country in the least democratic part of the classification spectrum. Russia has long been the most democratic of the four analyzed countries; in the last 15 years, the situation has changed and Russia has gradually moved closer to the level of authoritarianism in Belarus. On the other hand, Uzbekistan is approaching China, whose development in recent years has also been witnessing a renewed strengthening of authoritarian tendencies.Secondly, the study revealed similar positions in these countries in a number of areas in terms of democracy perception by representatives of the four countries surveyed. In all cases, the primary role of democracy was the link not to formal political procedures but to socio-economic stability and security. It can be assumed that this view is shared by the population of the surveyed countries, which is further supported by massive government propaganda and little understanding of the institutional aspects of democracy in the West.Emphasis is not usually placed on democracy, but on the legitimacy of a regime that is not derived from electoral results, but just from the degree of stability, security or prosperity. There are, however, significant differences between the countries studied: In the case of Russia, there are in parallel different discourses about democracy, many of which are very close to the Western concept. In China, there is a relatively open intellectual debate on democracy. In relation to the West, however, democracy in all four countries is perceived as an instrument of power intervention or, for example, in Putin's Russia, as a source of dual standards. If these limitations and cultural limits are taken into account, there is considerable room for effective democracy support in all these countries (see the recommendations in the conclusion of the study).