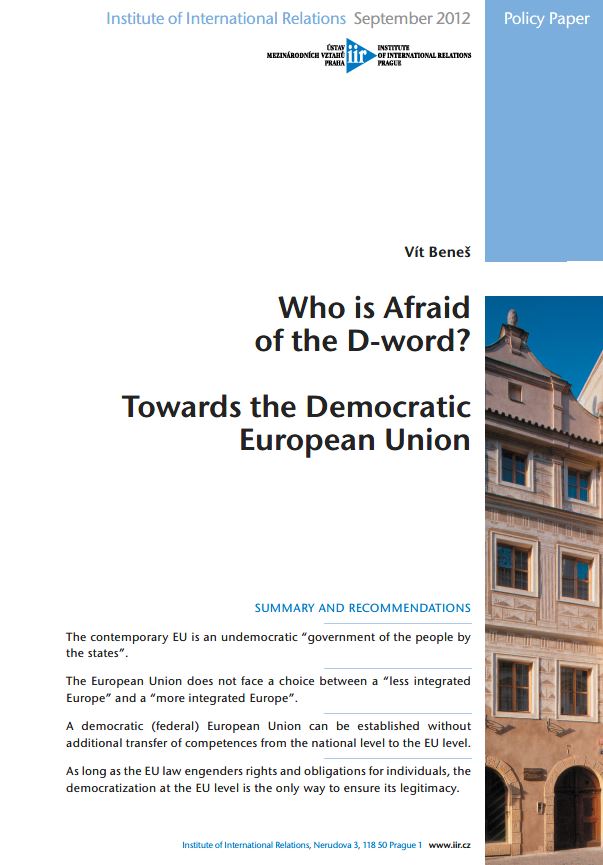 Author(s): Vít Beneš
Subject(s): Governance, Economic policy, Government/Political systems, EU-Accession / EU-DEvelopment
Published by: Ústav mezinárodních vztahů
Keywords: EU; economic governance; democratic deficit; contemporary EU system of government; eurozone;
Summary/Abstract: After decades of discussions, the EU offered very little to mitigate its democratic deficit. Now, faced with three imminent crises (the debt crisis, the euro crisis, the banking crisis), the “EU leaders” do not seem to bother with the questions of the democratic accountability and legitimacy of the EU’s / eurozone’s “economic governance”. This paper tries to revisit the democratic deficit debate. Some of the contributors to the debate conceptualized the democratic deficit as an imbalance between executive and legislature. But the conceptualization of the democratic deficit applied in this paper is different. In my conceptualization, I follow an iconic phrase uttered by Abraham Lincoln: “Democracy is the government of the people, by the people, for the people”. On a more abstract level, a system of government is legitimate if those who are governed (government of) correspond to those who govern (government by). A democratic deficit occurs if a people are governed (government of the people), but they themselves do not govern. 1. The contemporary EU is an undemocratic “government of the people by the states”. This system of government is not legitimate because those who are governed (the main subjects of the EU law – individuals who collectively form the People of the Member States) do not govern, and they do not produce the EU law. The contemporary EU system of government is not a government of the people by the people. In the EU, the states (who collectively form the European International Society)1 govern the people. 2. The European Union does not face a choice between a “less integrated Europe” and a “more integrated Europe”. The EU faces three basic questions that should not be confused: Who is governed on the EU level (states or people)? Who governs on the EU level (states or people)? Which competences should be transferred to the EU level, and which competences should remain on the national level? Different answers to these three questions lead to a number of possible institutional designs. However, only some of these institutional designs are democratic and legitimate. 3. A democratic (federal) European Union can be established without additional transfer of competences from the national level to the EU level. The democratic deficit of the EU is eliminated once the People of the Member States (individuals who are the subjects of the EU law) are allowed to govern themselves (create the EU law) within a specific scope of the EU’s competences. The (lack of) democracy on the EU level is not related to the scope of the EU competences, and this paper makes no recommendation regarding the scope of the EU competences. 4. As long as the EU law engenders rights and obligations for individuals, the democratization at the EU level is the only way to ensure its legitimacy. This paper proposes the creation of a Democratic Compact for the EU which would shift the decisionmaking power from the bodies that represent the European International Society of States (the European Council, the Council of the EU) to the bodies that represent the People of the Member States (the European Parliament, the President of the EU). The EU and the eurozone are becoming two distinct entities. Thus, a separate Democratic Compact is suggested for the eurozone.