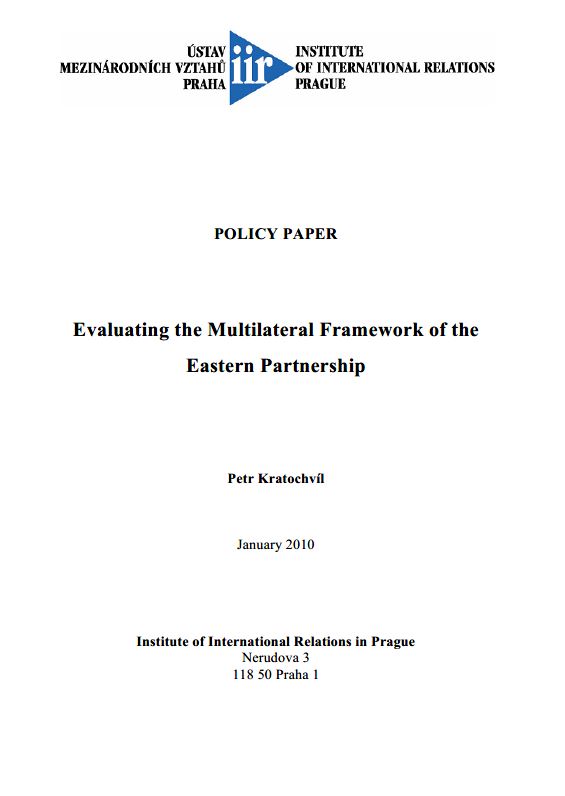 Author(s): Petr Kratochvíl
Subject(s): Civil Society, Governance, Environmental and Energy policy, International relations/trade, Economic development, Transformation Period (1990 - 2010), EU-Accession / EU-DEvelopment
Published by: Ústav mezinárodních vztahů
Keywords: EU; Eastern partnership (EaP); Eastern neighbors policy; multilateralism; operational structure; civil society; regulatory reforms; Southern Corridor; energy security; CIB;
Summary/Abstract: While the Eastern Partnership (EaP) only deepens the bilateral relations of the EU with its Eastern neighbors, its main contribution is the new multilateral framework designed exclusively for the ENP´s Eastern dimension. • It is the EU who has been enthusiastic about the multilateral approach. The partner countries are more restrained, citing two factors for their skepticism: (1) the fear that the EaP might gradually become an alternative arrangement to full membership and (2) the worry that multilateralism could decrease the so far prevalent country‐specific differentiation and thus slow down the quickest reformers. • The EaP´s multilateral framework has several major strengths: (1) the relatively simple and flexible “operational structure”, (2) the focus on regulatory reforms, (3) the introduction of the so‐called flagship initiatives, and (4) the increased involvement of civil society. • Among the potential problems, the most important are: (1) the launch of the EaP amidst growing political and economic instability across Eastern Europe, and (2) the financial resources which will not be sufficient in the long term given the ambitious work programme. • Regarding the four thematic platforms, they cover most issues on the agenda. But while some topics discussed are truly multilateral (e.g. energy cooperation), others are predominantly bilateral and their inclusion in the multilateral framework is largely artificial (e.g. judiciary and public administration reforms). • Some of the platforms with a strong agenda (such as energy security) are growing softer, hence limiting their relevance for both member and partner countries. • The flagship initiatives, although generally sound and beneficial, are not of equal standing in terms of their importance (cf. the integrated border management and the support for small enterprises on the one hand, and the underfinanced reponsiveness to disasters on the other). In addition, one important originally proposed initiative – the Southern Corridor – entirely disappeared from the agenda. • Two additional unresolved questions pertain respectively to the EaP´s relation to the other regional initiatives (BSS) and the participation of third countries. • The EaP has been doing well so far. Its long term success will be, however, dependent on four factors: (1) the continuous high‐level political support for the project in both the EU and the partner countries, (2) whether there will be an unwavering focus on regulatory reforms that will prevent the EaP´s multilateral framework from turning into an irrelevant talking club, (3) achievement of some visible successes in areas like energy security, border management or institution building (CIB), (4) the increase in funding available for the EaP after 2013.