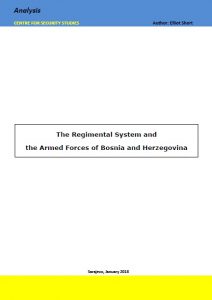 Author(s): Elliot Short
Subject(s): Security and defense, Military policy
Published by: Centar za Sigurnosne Studije
Keywords: army of Bosnia and Hercegovina;
Summary/Abstract: The regimental system is a method of military organisation developed by the British Army over the last 300 years, variations of which can be identified in the present-day armed forces of numerous Commonwealth states including Australia, Canada, India, Pakistan, and the United Kingdom (UK). Despite its widespread application and well documented history, however, any definition of the Regimental System must remain fluid. Socio-economic developments, coupled with advances in technology and military organisation, means that the parameters of what a regiment is – in terms of structure, composition, identity, and purpose – are constantly changing. David French, in his detailed study of military identities in the British Army, postulates that ‘the language of the “regiment” is so shot through with anomalies that to talk of a “regimental system” is itself almost a misnomer, for there was much about it that was anything but systematic.’1Perhaps the only consistent observation of the Regimental System focuses on its abstract, emotional appeal. When joining a regiment, a soldier enters a community which offers them an inspirational heritage, a legacy to defend, and the support of a “family” in a manner considerably more personal than the faceless bureaucracy of an army organised along the lines of the continental system. Such a dynamic, it is argued, fosters esprit de corps and boosts the morale of troops, ultimately leading to increased combat effectiveness and cohesion. Over 130 years after Edward Cardwell reformed the British Army and established the Regimental System, the model was applied to the newly integrated Armed Forces of Bosnia and Herzegovina (Bosna i Herzegovina, BiH; AFBIH), a military with no significant historical links to the British Army or the wider Anglosphere. This paper will offer an overview of the origins and development of the regimental system in a number of countries, explain how such a system came to be applied in BiH, and compare the application of the system in the AFBiH with other militaries which utilise it. The strengths and weaknesses of the regimental system in the AFBiH will then be considered, and the report will conclude with an analysis of how the regimental system could be reformed in order to strengthen the AFBiH.