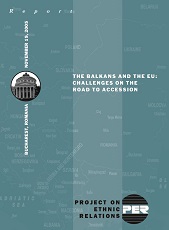 Author(s): Livia Plaks
Subject(s): International relations/trade, EU-Accession / EU-DEvelopment, EU-Legislation
Published by: PER Project on Ethnic Relations
Keywords: Western Balkans and EU;
Summary/Abstract: On November 19, 2005, the Project on Ethnic Relations, in cooperation with the Romanian Ministry of Foreign Affairs, organized an international roundtable discussion under the title "The Balkans and the EU: Challenges on the Road to Accession." The purpose of the roundtable was to provide a venue for frank dialogue among countries of the region and European institutions on the next wave of EU en-largement, how to make EU accession a reality, and the regional implications of future European inte-gration. The discussion also focused on the issue of Kosovo, and how the province's future status will impact the EU integration process for the region as a whole and for Serbia and Montenegro in particu-lar. The roundtable, which was held in Bucharest, brought together senior political leaders and gov-ernment officials from Albania, Bulgaria, Croatia, Hungary, Macedonia, Poland, Romania, Serbia and Montenegro including Kosovo, and Slovakia, as well as representatives of the Council of Europe, the European Union, and the United Nations. While all participants in the roundtable were in agreement that European integration should be their states' eventual goal, sharp differences in opinion were ex-pressed over the question of Kosovo. Kosovo Albanian leaders continued to insist that independence is the optimal solution both for Kosovo and for the region. Serbs rejected the possibility of an inde-pendent Kosovo and argued that such a step would set a dangerous precedent. Representatives of EU institutions avoided involvement in this debate but stressed that the countries of the Western Balkans still have much work to do, and many outstanding problems to resolve, before EU membership will be a reality for them. The Bucharest roundtable was unusual as a neutral, off-the-record setting for open discussions of often sensitive issues. This report documents those discussions.