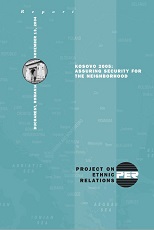 Contributor(s): Allen H. Kassof (Editor), Livia Plaks (Editor)
Subject(s): Security and defense, Inter-Ethnic Relations, Ethnic Minorities Studies, Peace and Conflict Studies
Published by: PER Project on Ethnic Relations
Keywords: Kosovo conflict 2005; Western Balkans Security;
Summary/Abstract: In the late summer and fall of 2004 the news from Kosovo was dominated by the run-up to the province’s parliamentary elections, which were held in October, and the question of whether the Kosovo Serbs would take part. While Serbian president Boris Tadic encouraged Kosovo’s Serbs to participate in the elections (though at the very last moment), prime minister Vojislav Kostunica, arguing that Kosovo’s provisional government had failed to protect the Serb community, strongly urged a boycott, and, in the event, on October 23 less than one percent of the Serbs living in Kosovo turned out to vote. On the heels of this development, which seemed to promise continued difficulties in the relationship between Albanians and Serbs in Kosovo, the Project on Ethnic Relations (both through its Princeton headquarters and its Center for Central, East, and Southeast Europe in Bucharest) together with the Romanian Ministry of Foreign Affairs, organized a roundtable meeting on “Kosovo 2005: Assuring Security for the Neighborhood.” The meeting, which was held in Bucharest, took up issues of Kosovo’s political dynamics, including Serb participation in Kosovo’s provisional institutions of self-government, implementation of United Nations standards for Kosovo, ways to approach the issue of Kosovo’s status, relations between Belgrade and Pristina and the impact of developments in Kosovo on regional security. At the time of the meeting Kosovo’s new coalition government had not yet been formed, and neighboring states sought a chance to communicate with leaders from both Pristina and Belgrade about how resolution of the province’s political status might move forward, and how the open issue of Kosovo affects a region that is eager for increased stability and, ultimately, European integration.