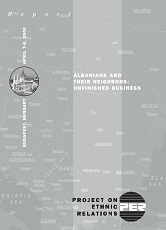 Contributor(s): Allen H. Kassof (Editor), Livia Plaks (Editor)
Subject(s): Security and defense, Inter-Ethnic Relations, Peace and Conflict Studies
Published by: PER Project on Ethnic Relations
Keywords: Albanian regional integration; Western Balkans; multiethnic Kosovo;
Summary/Abstract: On April 7 and 8, 2000, senior Albanian politicians from Albania, Kosovo, Macedonia, and Montenegro met with leaders of the democratic opposition in Serbia and leaders of the Kosovar Serb community; other political leaders from Macedonia and Montenegro; and representatives from Bulgaria, Greece, Hungary, Italy, Romania, the United States, the Council of Europe, the Stability Pact for South Eastern Europe, the OSCE, the European Union, NATO, and the United Nations. This unprecedented meeting, which was held in Budapest, Hungary, marked the start of a major initiative by the Project on Ethnic Relations on “Albanians and Their Neighbors.” It is aimed at maintaining a region-wide, high-level dialogue on the most explosive ethnic-political issue in Europe today. This report captures and records the main theme of this opening discussion: the conflicting hopes and fears of diverse ethnic communities during a period of rapid and often violent change in the Balkans. Three issues dominated the meeting: the current and future status of Kosovo and its impact on the politics of the region; interethnic arrangements in Montenegro and Macedonia and the relations of Albanians with the majority populations in those republics; and whether Albanian leaders in the region aspire to the creation of a “Greater Albania.”