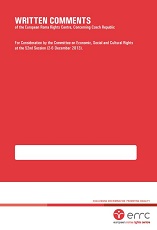 Author(s): Specified No Author
Subject(s): Education, Human Rights and Humanitarian Law, Public Administration, Welfare systems, State/Government and Education, Evaluation research, Social differentiation, Ethnic Minorities Studies
Published by: European Roma Rights Center
Keywords: Serbia; Roma; Romani children; human rights; education; segregation; policy; special schools; stat care; identity documents; birth registration;
Summary/Abstract: The European Roma Rights Centre (ERRC) and Praxis respectfully submit their written comments concerning Serbia for consideration by the Committee on the Rights of the Child (CRC) at its Concluding Observations of the 74th Session, which will be held from 16 January to 3 February 2017. The ERRC and Praxis have undertaken regular monitoring of the human rights situation of Roma in Serbia and this report reflects the current priorities in our work in Serbia. According to current official estimates, Roma in Serbia make up approximately 2.05% of the total population or 147,604 Roma. This makes Roma the second largest minority after Hungarians. However, a verified and accurate count remains elusive. Unofficial sources suggest that the number of Roma in Serbia is significantly higher, ranging between 250,000 to 500,000. In addition to the autochthonous groups, approximately 4,000 –50,000 Roma fled during and after the conflict in Kosovo to Serbia; only half of whom registered as internally displaced persons (IDPs). However, it is not known if all of them remained in Serbia or left for destinationsin Western Europe. Furthermore, thousands of Roma have been returned to Serbia from Western Europeancountries in the last years as failed asylum seekers; including Roma who were originally from Kosovo.Roma are the youngest ethnic group in Serbia. The average age is 27.5 years, compared to 40.2 years among the general Serbian population. According to UNICEF, the primary school completion rate for non-Roma children is 94.5% and the transition rate to secondary school is 96.5%, while for Roma children the primary school completion rate considerably lower - 63%, while the numbers for secondary school for Roma youngsters is even lower - 55.5%. Illiteracy rates range between age groups from 13.7% amongst adolescents to 57.2% among the elderly. Romani women are extremely disadvantaged when it comes to education achievements; illiteracy is estimated to reach up to 80%.