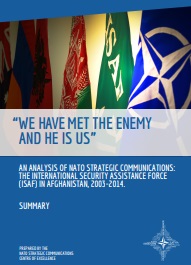 Author(s): Author Not Specified
Subject(s): Media studies, Geography, Regional studies, Communication studies, Recent History (1900 till today), Security and defense, Military policy, Peace and Conflict Studies
Published by: NATO Strategic Communications Centre of Excellence
Keywords: Afganistan; NATO; security; military mission; communications; ISAF;
Summary/Abstract: By the time the green International Security Assistance Force (ISAF) flag was lowered for the last time at NATO headquarters in Afghanistan at the end of 2014, over 1 million NATO troops, civilians and contractors had served in theatre and many continue to do so as part of NATO’s commitment to Afghanistan. The financial cost is estimated conservatively to be at least $1 trillion US dollars. Almost 3,500 troops from 29 nations lost their lives, and tens of thousands more suffered serious injury. By any metric it is the longest, most complex, expensive and fractious operation in NATO’s history. The information environment today bears little resemblance to when the ISAF mission began. The past decade has witnessed a transition from the implications of the ‘strategic corporal’ to that of the ‘strategic tweet’ and adversaries have become increasingly more capable at using new communication tools. While it may be unlikely that the Alliance will conduct another mission like ISAF, important lessons can be drawn about policy, doctrine and capabilities to ensure that NATO Strategic Communication (StratCom) is fit for purpose in future operations. The NATO Strategic Communications Centre for Excellence was engaged to carry out an examination of the NATO StratCom effort during the ISAF years 2003-2014, with a particular focus on Public Affairs, Psychological Operations and the coordinating function Information Operations. It is the most extensive study to date of NATO StratCom, drawing from nearly 100 interviews with persons having direct knowledge of the Afghanistan mission from across the full scope of the campaign, representing many different nationalities and responsibilities. Source material includes speeches, NATO and ISAF briefings, extensive media reporting and a substantial collection of published literature. Numerous experts reviewed chapters throughout its development, and the report was peer reviewed by 22 experienced practitioners from 8 nations, from all communications disciplines. The study aims to question the commonly held view that NATO ‘lost’ the communications battle by assessing how effective the collective StratCom effort was and to understand the factors that contributed to its successes and major shortcomings.