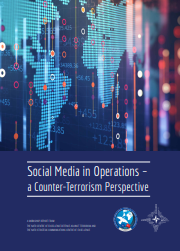 Author(s): Berfin Kandemir, Alexander Brand, Ben Heap
Contributor(s): Iona Allan (Editor)
Subject(s): Politics, Media studies, Communication studies, Security and defense, Social psychology and group interaction, ICT Information and Communications Technologies
Published by: NATO Strategic Communications Centre of Excellence
Keywords: NATO; StartCom; media; information; communication; social media; security and defense; terrorism; counter-terrorism; psychology;
Summary/Abstract: Social media has assumed a fundamental role in today’s society. As a technology with a high level of reach, billions of people are connected daily through global platforms, where they share personal experiences, documents and visual content. Social media has become one of the main channels through which people connect and communicate. NATO, as an organisation of 29 member states with different historical and cultural backgrounds, has made great efforts to develop its social media capabilities. NATO and its key decision makers are present in nearly all major social media networks and have gathered thousands of fans and followers. The current #wearenato campaign conveys the message that every day NATO allies work and train together to keep their citizens safe and that NATO, through partnership and cooperation, has secured peace and freedom for nearly 70 years. Most of NATO’s current social media efforts are focused on this ‘message delivery role’, aiming to raise awareness about NATO as a brand and to resonate with key opinion formers within a younger audience. Since September 2014, when NATO’s Strategic Communications Centre of Excellence (StratCom COE) was established in Riga, Latvia, substantive progress in the study and understanding of social media has been made. The StratCom COE has published a number of research papers exploring current trends in social media and leading discussions on future strategy and related concepts, including the delivery of courses in social media analysis. NATO is involved with two major strands of work, both of which explore more flexible approaches of analysing and engaging with social media. First, the ‘Digital and Social Media Playbook’ currently under development by NATO’s Science and Technology Organisation (STO) will constitute an up-to-date information environment assessment tool. Second, through the Multinational Capability Development Campaign (MCDC), NATO has supported the development of two social media-related concepts to be used specifically in operations. Although there are a number of academic publications that cover the use of social media for military purposes or provide recommendations on how social media can support military actions on the ground, few previous projects have focused on the exploitation of social media in the context of Counter-Terrorism (CT). This is understandable, as according to NATO’s CT policy and concept, terrorism is dealt with at the national level by law enforcement agencies under state control and supervision. In most cases NATO would support Member States at their request, or as part of an operation in an environment in which law enforcement forces of the nation state are overstretched or non-existent. Apart from a collective defence scenario, this is unlikely to happen within the territories of the Member States and has more relevance for non-aligned nations. As part of ongoing efforts to further develop the CT perspective on social media, the NATO Centre of Excellence-Defence against Terrorism (COE-DAT) and the NATO StratCom COE conducted a workshop on ‘The exploitation of social media on operations’ in September 2017. The views were collected of over 20 social media experts and analysts, as well as NATO CT experts. The aim of the workshop was to develop the overall approach of the military’s use of social media to deliver effects in CT scenarios. As such, the workshop can also be seen as part of both centres’ contribution to strengthening of NATO’s fight against terrorism. This report provides a summary of those discussions. A brief outline of the panel’s main presentations is provided as well as a summary of the following questions discussed during the Q&A. „ Can hard-line terrorist groups with extremist narratives be effectively countered with messaging or would it be better to focus on those individuals and groups on the brink of radicalisation and joining a terrorist group? „ Assuming that former terrorists enjoy high credibility within the target audience (with reference to “Breaking the ISIS Brand” by Anne Speckhardt), how could or should they be integrated within military operations? What would such operations look like? „ Can offensive Cyberspace and Information Operations extend the role of the military within Countering Violent Extremism (CVE) programmes? „ How could CT-related social media expertise be integrated into HQ structures? „ Is it possible to develop reach-back capabilities to support deployed forces? „ What tools are there to offensively counter aggressive strategic narratives and which of them are in use in military entities of NATO and the nations? „ Which information from social media is relevant from an intelligence analyst’s viewpoint and which tools are used for social media analysis in military entities? „ Once key influencers and propaganda distribution centres have been identified, should the military take measures to impede the spread of certain messages? In such cases, is the military capable of doing so or would this require external / industry support? „ How are CT aspects reflected in the roles and responsibilities of existing functions and capabilities, such as StratCom, Info Ops, PA, and PSYOPS? Which concepts / doctrine could be improved and updated? „ How does the social media industry counter terrorism and where would cooperation with the military be beneficial? In closing, a number of suggestions regarding the following key issues identified are provided: „ Counter-Narratives „ Identities „ Social Media Analysis in support of Intelligence „ Information Operations, Psychological Operations and Counter-Terrorism These suggestions include future steps which might be beneficial for further CT-related exploitation of social media in military operations. We hope that those who could not attend the workshop can enjoy the content of this publication – as well as spark their interest in future activities dealing with this important topic.