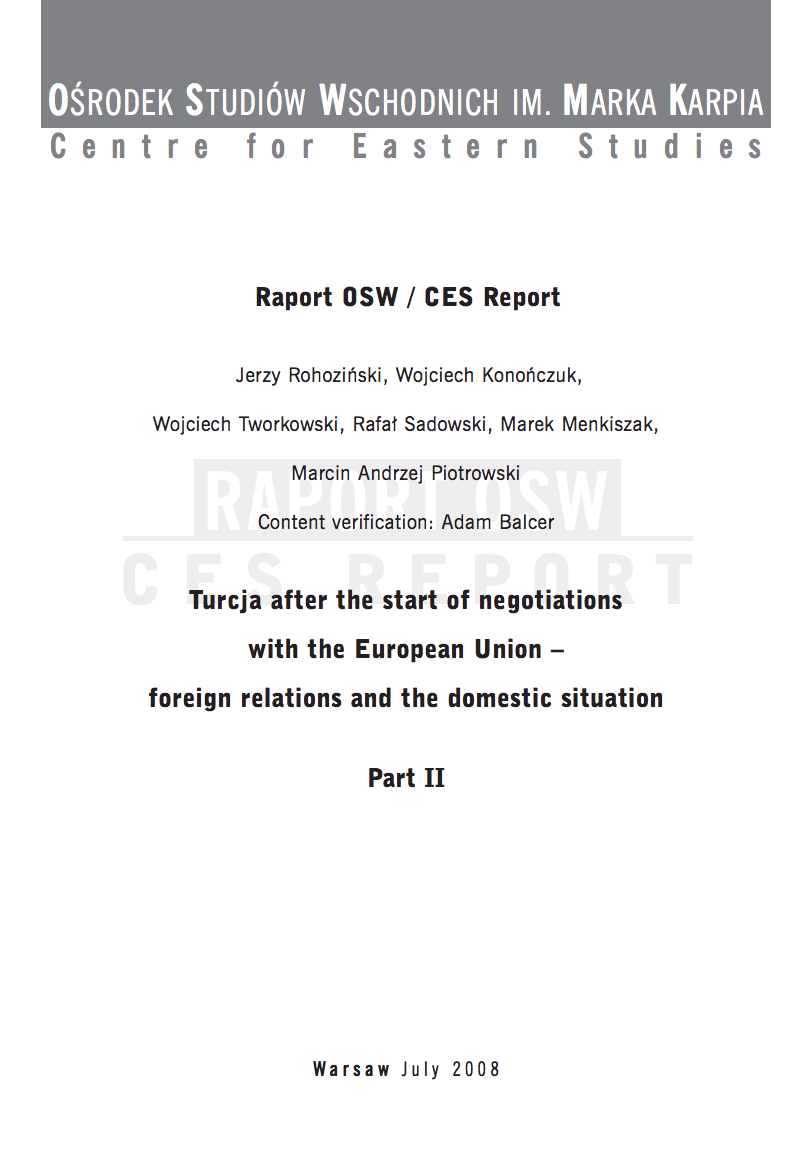 Author(s): Adam Balcer, Wojciech Konończuk, Marek Menkiszak, Marcin Andrzej Piotrowski, Jerzy Rohoziński, Rafał Sadowski, Wojciech Tworkowski
Subject(s): International relations/trade, EU-Accession / EU-DEvelopment
Published by: Ośrodek Studiów Wschodnich im. Marka Karpia
Keywords: Turkey; European Union; PART 2
Summary/Abstract: The Centre for Eastern Studies has decided to embark on the project entitled 'Turkey after the start of negotiations with the European Union - foreign relations and the domestic situation' for two major reasons: the start of the accession negotiations between Ankara and the European Union in October 2005, and the significant part which Turkey plays in western Eurasia (the Caucasus, the countries in the basins of the Black and Caspian Seas, the Middle East and the Balkans) which We wish to present our readers our second report discussing Turkey's relations with Central Asia, the Caucasus and Russia, the aspect of Turkish foreign policy regarding the Black Sea, and the role of Turkey as a transit country for oil and gas from the Middle East and the Caspian regions. The evaluation of Turkey's standpoint and potential regarding the aforementioned issues is especially important, considering the tensions existing in Turkey's relations with the EU and the USA, as well as the West's increasing engagement in the Caucasus, Central Asia and Black Sea regions. In this process, Ankara may play the role of a significant ally for the West. However, it may just as readily play the role of its rival, who could co-operate with other countries and may seriously frustrate the implementation of the EU and US' goals. The Report was developed between autumn 2006 and autumn 2007, over which time the project participants searched for publicly available documents in Poland, Turkey, EU countries and the USA, and went on five research trips to Central Asia, Russia, Turkey and Caucasus, where they met local analysts, officials and researchers.The authors of this Report would like to express their gratitude to everyone who has shared their opinions with them, and to the Polish diplomatic service, particularly to Minister Andrzej Ananicz, for their expert support and assistance in the authors' work on the Report.This Report does not present the official stance of the Polish government on the issues discussed therein; instead it reflects the personal views of its authors, who have made their best efforts to ensure that their work is reliable.