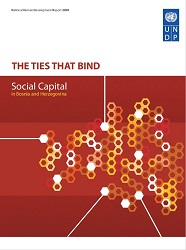 Author(s): Nicola Nixon, Stephanie Roels, Lucia Desigis, Miroslav Divčić, Hans Fridberg, Marija Ignjatović, Karla Koutkova
Contributor(s): Armin Sirčo (Editor)
Subject(s): Politics, National Economy, Civil Society, Governance, Sociology
Published by: UNDP United Nations Development Programme
Summary/Abstract: Despite the progress that has been made since the end of the 1992-1995 conflict in BiH, the country’s social fabric is still weakened and frayed. Levels of social trust are very low. In contrast to what one might assume – that levels of trust and social cohesion would be increasing, as the conflict recedes into the past – evidence suggests that over the past few years trust levels have been worsening. This low social trust manifests itself as a considerable development challenge in BiH, in particular in light of the country’s aspirations to join the European Union in the near future. // Social trust is something that binds societies together and helps them function. It makes people’s interactions with one another, and with institutions and service providers, smoother and more eﬃcient. A lack of trust, in contrast, has the tendency to make those processes more laborious and fractious. Together with civic participation and norms of reciprocity, trust is a crucial component of social capital. // They are the features of society that facilitate cooperation between people that results in mutual benefit. The concept of social capital arises, therefore, from the assumption that relationships matter: that understanding the diﬀerent constellations of social networks and the functioning of everyday social ties is essential to interpreting – and ultimately intervening to change – broader social processes. // The report finds that BiH’s social fabric is characterised by fragmentation and segmentation rather than cohesion and solidarity. BiH has a web of localised strong ties, based on strong family relations. Such strong ties do have their advantages. For example, they can provide support in times of need. To that extent, it is clear that in their immediate networks people care and look out for each other to a great extent in BiH. // Those with higher education have more diverse networks, highlighting the importance of strengthening the education system in BiH and improving retention levels. Yet, for the benefit of broader society, a lot more needs to be done to build broader, more integrative and wider-spanning ties, incorporating members of other communities, ethnicities, social classes and both genders.