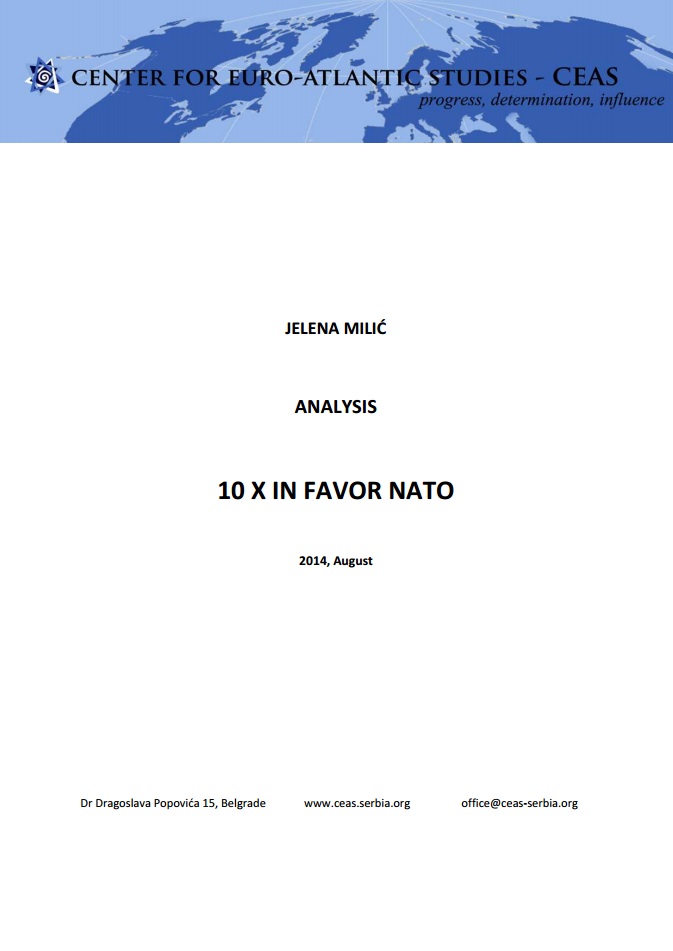 Author(s): Jelena Milić
Subject(s): Security and defense, Military policy
Published by: Centar za evroatlantske studije CEAS
Summary/Abstract: The initial provision of the North-Atlantic Agreement defines the principles, conditions and standards that countries aspiring for membership need to achieve in order to become a NATO member...So far, NATO countries have not gone to war against each other. Historical experience offers us strong evidence that NATO membership, and its expansion, leads to historic reconciliation (France, Germany) stability and democratization of states (Spain, Greece, Portugal..)...Many relevant comparative research unquestionably shows that, in the long-term, the countries with such an inner-political establishment are by rule of thumb the most stable, not only socially, but also economically, because independent institutions, division of powers and rule of law and protection of human rights...Through full-fledged NATO membership, a country becomes an integral part of the decision-making mechanism in NATO... The first and most basic direct benefit of membership is enjoyment of the rights, as well as obligations, arising from Article 5 of the North-Atlantic Agreement which states that an attacked Member State will be defended by the entire Alliance...According to Article 4 provisions of the North Atlantic Agreement, each state has a right to call for consultations whenever it considers necessary and when, according to its assessment, her territorial integrity, political independence or security of that NATO Member State is threatened.NATO Member States have transparent defense budgets. They try to strategically plan these expenditure together, thus forming mechanisms of joint participation in procurement of equipment and other joint use of resources...In the North-Atlantic world, NATO has no alternative, as it is often argued in Serbia. There is no other military-political alliance with a clearly defined method of decision-making and a developed joint command structure. Although it is hard to detect the exact proportion that only NATO membership brings in economic terms, all new Member States agree that they have experienced a so-called “NATO effect” after joining – starting with an increase in GDP...Therefore – join NATO!