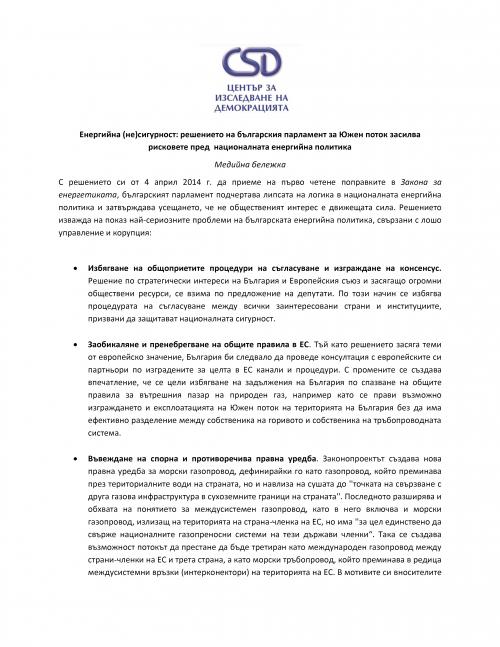 Author(s): Author Not Specified
Subject(s): Politics / Political Sciences, Politics, Social Sciences, Economy, Law, Constitution, Jurisprudence, National Economy, Energy and Environmental Studies, Sociology, Economic policy, Applied Sociology, Economic development
Published by: Център за изследване на демокрацията
Summary/Abstract: The decision of the Bulgarian Parliament from 4 April 2014 to adopt at first reading the amendments in the Energy Law, which grants South Stream special status highlights the lack of logic in the national energy policy and compounds the impression that public interest is not the driving force behind the proposed changes. The decision and the manner, in which it was taken, reveal some of the most serious problems in Bulgaria’s energy policy in terms of bad governance and corruption.The adopted amendments at first reading to the Energy Law demonstrate yet again the risks of state capture by third-party interests, which do not correspond or even contradict the public interest. The real problems, which Bulgarian society faces on a daily basis, such as energy poverty, high energy prices, and low diversification and energy efficiency receive only a fraction of the attention, in terms of institutional and policy-making focus, compared to projects such as South Stream. What is even more alarming is that the recent actions of the ruling majority take place in the context of increasing geostrategic insecurity and danger of confrontation, which further exacerbate the risks deriving from such decisions.