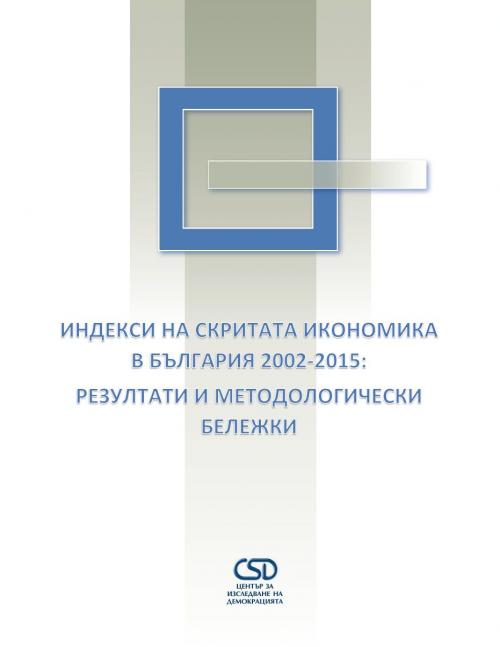 Author(s): Author Not Specified
Subject(s): Politics / Political Sciences, Politics, Social Sciences, Economy, Law, Constitution, Jurisprudence, National Economy, Criminal Law, Sociology, Economic policy, Applied Sociology, Evaluation research, Economic development, Law on Economics, Socio-Economic Research
Published by: Център за изследване на демокрацията
Summary/Abstract: The current document presents the methodology for calculation of the Hidden Economy Indexes in Bulgaria among the population and the business, as well as the results of the surveys for the period 2002-2015. Hidden economy surveys in Bulgaria have been carried out by the Center for the Study of Democracy and the market and social research agency Vitosha Research since 2002. Based on data from these surveys, a system of synthetic measurements in the form of composite indices for assessment of the hidden economy was developed. The reason for choosing these particular indicators was to reduce the multiple aspects of the hidden economy phenomenon to a manageable number of illustrative and easy to interpret the indices. The survey questions and sub-indexes, which form the Business Hidden Economy Index and the Index of the Hidden Economic Activity of the Population, are presented in the document. The authors underline the difference between the terms official economy (legal and reported), informal economy (legal, yet unreported), illegal (black) economy (illegal and unreported) and undeclared (gray) economy (legal, formally registered, yet unreported). The last three form the composite term hidden economy.