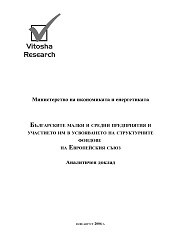 Author(s): Author Not Specified
Subject(s): Politics / Political Sciences, Politics, Social Sciences, Economy, Law, Constitution, Jurisprudence, National Economy, Business Economy / Management, Micro-Economics, Civil Society, Sociology, Economic policy, Applied Sociology, Evaluation research, Economic development, EU-Accession / EU-DEvelopment, Sociology of Politics, Socio-Economic Research
Published by: Център за изследване на демокрацията
Summary/Abstract: After Bulgaria joins the EU in 2007 the country will receive access to the Structural Funds (SF) and the Cohesion Fund of the European Union (EU), which are the main instruments for reducing the economic and social disparities within the Union. The effective management of these proceeds entails good knowledge of the EU Funds’ requirements and thorough preparation at national, regional and local levels both by the public and private sectors, including the small and medium-sized enterprises (SMEs). In 2000 in Lisbon, the European Commission and the EU Member States agreed upon the ambitious goal that by 2010 the European Union would have to become the most dynamic knowledge-based economy in the world . The instruments and mechanisms to achieve this goal have been outlined in the Lisbon Strategy of the EU. In 2005, an interim review on the progress of the Lisbon Strategy was done, based on which it was concluded that the Union was falling behind in some of its basic parameters, and that the gap between the EU and the leading innovative world economies of the United States and Japan was broadening.