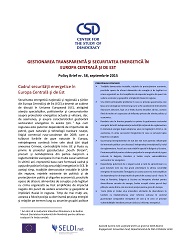 Author(s): Author Not Specified
Subject(s): Politics / Political Sciences, Politics, Social Sciences, Economy, Law, Constitution, Jurisprudence, National Economy, Supranational / Global Economy, Energy and Environmental Studies, Sociology, Economic policy, International relations/trade, Applied Sociology, Evaluation research, Economic development, Sociology of Politics, Socio-Economic Research, Geopolitics
Published by: Център за изследване на демокрацията
Summary/Abstract: The national and regional energy security of Central and Eastern European (CEE) countries has become a hot topic of discussion in the EU recently, focusing the attention of experts, policy makers, and the general public on ongoing and future energy projects but also on the features of energy governance in these countries. The interruption of gas supplies to Europe as a result of the Russian-Ukrainian pricing dispute in 2009, the continuing Russian-Ukrainian crisis after the annexation of Crimea, and the EU-Russia controversies regarding the South Stream pipeline project, as well as Gazprom’s non-compliance with the EU regulations in several anti-trust cases in the past few years are the major cornerstones that shape the CEE energy security framework and policy options as the region remains heavily dependent on Russian oil, gas, and nuclear technology. At the same time, the fragile democratic traditions in the CEE countries, the existing networks of political protectionism and economic oligarchy, and the opaque business practices nurtured by corruption and links with organized crime, have been reinforced by the negative implications of Russian economic and geo-political influence. Russia has exploited its dominant position in the energy market and its long-term links with certain political and economic groups to shape political decisions across the region according to its own interests, but often to the detriment of the home country consumers. The current review of energy security risks in four selected CEE countries, two energy poor – Bulgaria and Serbia, and two energy-resourced– Romania and Ukraine, assesses the factual situation per se and the transparency and accountability of energy policy governance in the region.

Series: Center for the Study of Democracy - CSD Policy Briefs