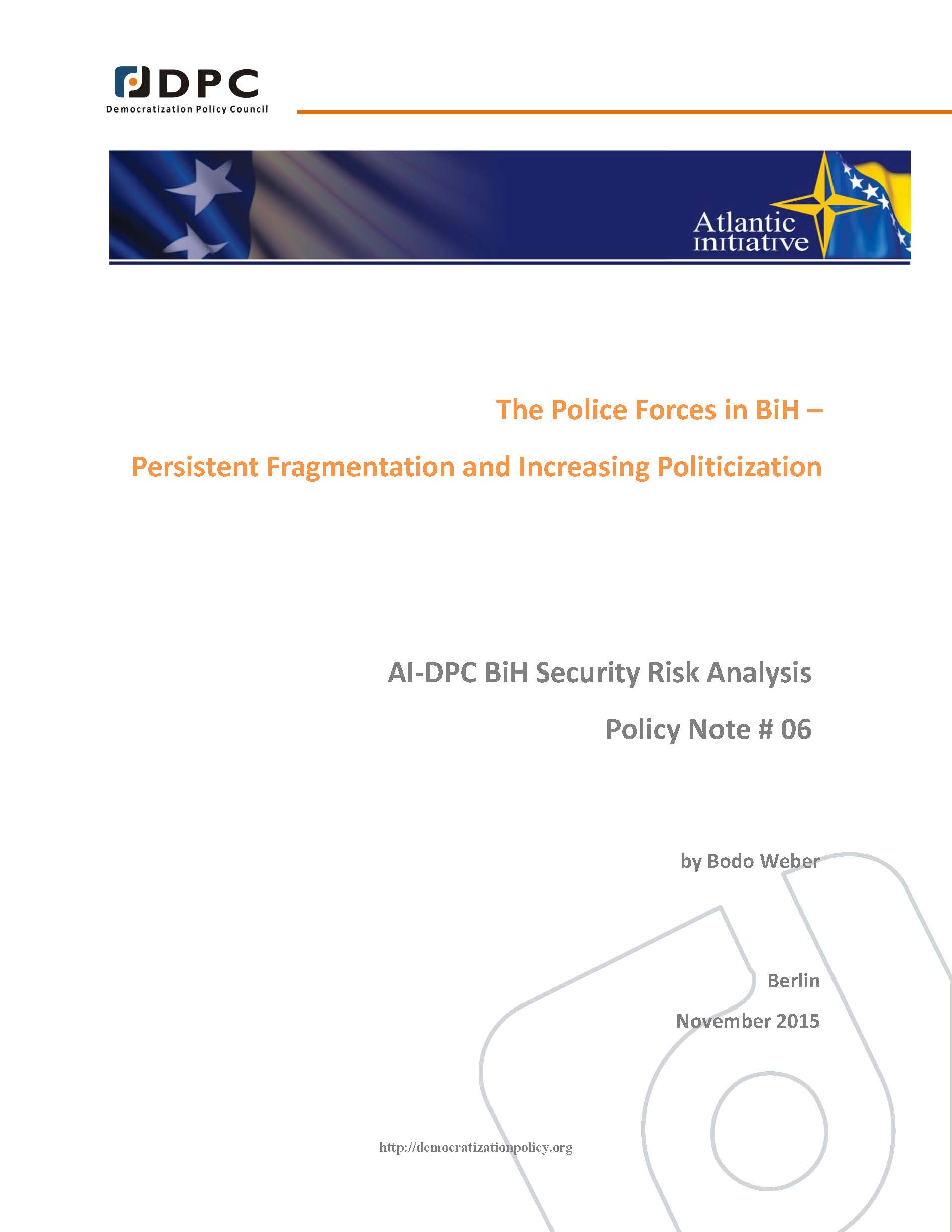 Author(s): Bodo Weber
Contributor(s): Toby Vogel (Editor)
Subject(s): Politics, Security and defense
Published by: DPC Democratization Policy Council e.V.
Keywords: BiH; police; fragmentation; public order; inter-ethnic conflicts; EU; EUPM; RS; FBiH; ministry of security; Milorad Dodik; SNSD; SDA; SDP; LIA; SIPA; post-war; reform; Zvornik; police station;
Summary/Abstract: The police forces of Bosnia and Herzegovina (BiH) are assigned a key role in maintaining public order and security and in preventing the re-emergence of any kind of violent interethnic conflict. The police represented one of the weakest points when the international community started to engage in supporting the reconstruction and democratic transformation of the state in post-war BiH. Pre-war, the police had been highly professional but lacked any tradition of independence from politics. During the war they underwent a process of deep de-professionalization and further politicization, even criminalization, as the interior ministry was divided into ethnic components and police were drafted into participating in ethnic cleansing and war crimes. Reforming the police – with the goal to decriminalize them, raise their professional level and shield them from political interference – became one of the top priorities of international efforts to restore public order and safety and support democratic consolidation. Under international leadership police officers were vetted, the number of police officers was reduced, the posts of police director and police commissioner were established at entity and cantonal levels, Independent Boards were created to select candidates, transparent rules for hiring and promotion of police officials were set, and training and education was modernized. While these measures proved moderately successful, one crucial reform ultimately failed – the attempt to overcome the structural fragmentation of the country’s police among the various levels of government and the concomitant lack of institutional hierarchy among the numerous police agencies. The collapse of police reform in 2007 marked the first major development that resulted from a policy shift by the West, now under European Union (EU) leadership, towards lowering conditionality in the face of domestic resistance to reform, in the futile hope that this would create reform momentum. The consequence of Brussels initialing a Stabilization and Association Agreement (SAA) in 2007 in return for a mere written commitment by political leaders to future police reform and the creation of a number of (impotent) agencies at the state level (first and foremost the Directorate for Coordination of Police Bodies of BiH) instead of actual agreement on police reform was that there was no reform; neither the political elites nor the EU ever revisited the reform commitment. In 2012 the EU closed its Police Mission (EUPM) despite not having completed its mandated task – quite the contrary: attempts in both entities to roll back reform in areas where EUPM had set closing benchmarks were in full swing. The EU’s disengagement from serious reform has meant that structural problems in both entities remain unaddressed. In the Republika Srpska (RS), the police remain both highly centralized and highly politicized. In the Federation, the police agencies remain fragmented. The Federation police agency remains weak, the ethnic Bosniak-Croat divide within cantonal police agencies in mixed cantons has not disappeared, and cooperation between Federation and cantonal police remains ad-hoc and dependent on goodwill. The state-level Ministry of Security and the Directorate for Coordination of Police Bodies of BiH exist in an institutional twilight zone; cooperation between them and among various other agencies depends on goodwill that is rarely forthcoming. As a second consequence of the EU’s reform disengagement, the police have faced massive reform rollback attempts by the ruling political elites since 2011, when the first general elections following the shift in Western policy were held. In the RS, a new Law on Police Officials and a new Law on Internal Affairs (LIA) have further strengthened the political stranglehold over the police. Up until 2014, RS President Milorad Dodik had further secured political control over the police through an informal, parallel command structure bypassing the interior minister. Following the October 2014 elections that weakened the ruling Alliance of Independent Social Democrats (SNSD) of RS President Milorad Dodik, he picked a new interior minister whose political loyalty is beyond doubt, as part of his efforts to further strengthen his political grip over the police. In the Federation, an open conflict erupted between entity and cantonal interior ministers and heads of police at entity and cantonal levels, and between the two largest parties, the Party of Democratic Action (SDA) and the Social Democratic Party of BiH (SDP), over the latter’s attempt to establish political control over the police by way of new cantonal and entity LIAs. The attempt failed in 2014 just as general elections and the end of the rule of the SDP were nearing; the Federation adopted an LIA version championed by the West. But attempts at re-politicization through new LIAs continue at the cantonal level; changes to the book of rules for the Federation police agency appear to have the same purpose. This massive push for stronger political control has prompted all levels of police forces, from the State Investigation and Protection Agency (SIPA) down to the cantonal police corps, to steer clear of organized crime and corruption cases that might implicate the ruling elites.