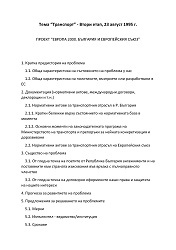 Author(s): Author Not Specified
Subject(s): Politics / Political Sciences, Politics, Social Sciences, Economy, National Economy, Sociology, Economic policy, Applied Sociology, Evaluation research, Economic development, EU-Accession / EU-DEvelopment, Socio-Economic Research
Published by: Център за изследване на демокрацията
Summary/Abstract: In a close historical context, the basis for settling all aspects of inter-state interests in transport is and continues to be the bilateral agreements of the Republic of Bulgaria with stakeholders in the field of rail, road, air, sea and river transport. Due to the public-political interest and the need to regulate the market spaces and the conditions for mutual access to the national infrastructure networks, respectively. Water and airspace, general agreements on combined transport, on dangerous goods transport, on seaman's passports and on a number of other issues have been concluded. In compliance with the provisions of the basic documents of the International Union of Railways, the Danube Commission, the International Maritime Organization, the International Road Transport Union, the International Civil Aviation Organization, etc. our country has undertaken and fulfills its commitments as an equal A participant in the European and global transport market. The Republic of Bulgaria has entered into working relations with EU bodies in the preparation and implementation of concrete actions for the integration of the national transport system with similar European structures in both institutional and operational operational and technical aspects.