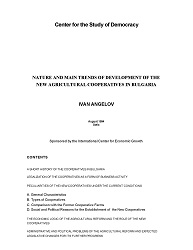 Author(s): Ivan Angelov
Subject(s): Social Sciences, Economy, National Economy, Agriculture, Sociology, Applied Sociology, Economic development, Socio-Economic Research
Published by: Център за изследване на демокрацията
Summary/Abstract: The cooperative forms of business and social activity are deeply rooted in the traditions of the economic development of Bulgaria. The Bulgarian cooperatives were established as a form of management more than one hundred years ago, shortly after the liberation from the Turks. The first cooperative was formed in 1890 in the village of Mirnovo, Pirdop region. Its name, "Plough", reflects the primitive technical level of agriculture at that time when the wooden plough was the predominant agricultural tool. The number and the types of cooperatives (credit, consumer, agricultural, production, tobacco, silk-worm, forest, dairy, etc.) increased rapidly. In 1909 the number of the cooperatives and associations totaled 492, in 1927 they were 2 852, while in 1941 they went up to 4 476, 1 116 of which were production cooperatives. In 1907 the First General Union of the agricultural cooperatives was founded. During this period the growing number of cooperatives followed the downward trend of the average farm area: 63 dca in 1910, 57 dca in 1926, 49 dca in 1934, 42 dca in 1946. Even at that time the cooperative aimed at more efficient use of the cultivated land through its amalgamation.