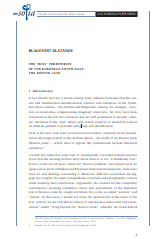 Author(s): Slobodan Naumović
Subject(s): Social development, Sociology of Culture, EU-Accession / EU-DEvelopment, Sociology of Politics
Published by: Centre for Advanced Study Sofia (CAS)
Summary/Abstract: This paper starts from the assumption that the European future of Balkan/South East European countries depends to a significant extent on the self-perceptions and expectations of the local populations, as well as on the identities that they are yet to imagine and construct. The proper understanding of, and adequate response to, popular self-perceptions, perceptions of encompassing social realities, and expectations are held here to be vital preconditions for sustainable political development in each of the countries that constitute the region, as well as for their prospects for EU Accession. As Pierre Bourdieu would say, political action is possible because actors who are a part of the social world possess knowledge of that world, and because one can act upon the social world by infl uencing the actors’ knowledge of it. However, in order to control and change an actor’s knowledge of the world, one fi rst has to invest some effort in understanding it. This paper focuses on one particular thread in the tightly knit web of popular Serbian self-perceptions, that is, the set of narratives on Serbian disunity, disaccord and resulting splits. The paper will offer an examination of their socio-political bases, modes of functioning, as well as of consequences of their political instrumentalisation. Disunity and disaccord have acquired in the Serbian popular imaginary a notorious, quasi-demiurgic status. They are often perceived as being the chief malefactors in Serbian history, causing political or military defeats, and threatening to tear Serbian society completely apart. Out of that reason, the complex set of deep-rooted self-perceptions and self-descriptions occupies a privileged place amongst what the anthropologist Marko Živković, paraphrasing Clifford Geertz, has termed as “stories Serbs tell themselves and others about themselves”, or what, addressing a different context, Nancy Ries has named “the world of Russian talk. [...]