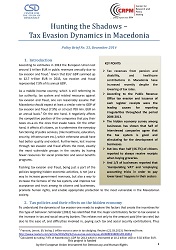 Author(s): Author Not Specified, Center for Research and Policy Making CRPM
Subject(s): Social Sciences, Economy, Law, Constitution, Jurisprudence, Sociology, Socio-Economic Research
Published by: Център за изследване на демокрацията
Summary/Abstract: The Center for the Study of Democracy, in collaboration with the Center for Research and Policy Making (CRPM) elaborated a series of policy briefs analyzing the hidden economy in Macedonia. The topics encompass the issues of countering undeclared labour, tax evasion and fraud, media reporting on hidden economy and corruption, etc. According to estimates in 2013 the European Union lost around 1 trillion EUR in public revenues annually due to tax evasion and fraud. Given that EU's GDP summed up to 12.7 trillion EUR in 2013, tax evasion and fraud represented 7.9% of its annual GDP. The current policy brief stresses that as a middle-income country, which is still reforming its tax authority, tax system and related measures against tax evasion and fraud, one can reasonably assume that Macedonia should expect at least a similar rate to GDP of tax evasion and fraud (7.9%) or at least 700 mln. EUR on an annual basis. On the one hand, it negatively affects the competitive position of the companies that pay their taxes vis-a-vis the ones that evade taxes. On the other hand, it affects all citizens, as it undermines the everyday functioning of public services, (like healthcare, education, security, infrastructure etc.), which otherwise would have had better quality and extent. The authors underline several key points: tax revenues from pension and disability, and healthcare contributions in Macedonia have increased recently despite the lowering of tax rates; according to the Public Revenue Office tax evasion and issuance of cash register receipts were the leading causes for reporting irregularities throughout the period 2006-2013; the hidden economy survey among businesses has shown that half of interviewed companies agree that the tax system is good and stimulating for the development of businesses; but less than half (46.7%) of citizens reported to always receive receipts when buying groceries; and 1/3 of businesses reported that ‘manipulating VAT’ and ‘employing accounting tricks in order to pay lower taxes’ happens in their sectors.