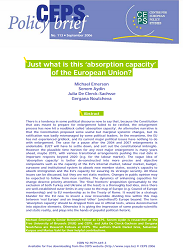 Author(s): Michael Emerson, Senem Aydin, Julia De Clerck-Sachsse, Gergana Noutcheva
Subject(s): Politics, Constitutional Law, Evaluation research, EU-Accession / EU-DEvelopment
Published by: CEPS Centre for European Policy Studies
Keywords: EU; absorption capacity; constitution;
Summary/Abstract: There is a tendency in some political discourse now to say that, because the Constitution that was meant to prepare for enlargement failed to be ratified, the enlargement process has now hit a roadblock called ‘absorption capacity’. An alternative narrative is that the Constitution proposed some useful but marginal systemic changes, but its ratification was badly mismanaged by some political leaders. In the meantime, the EU has not experienced gridlock, and its current major political issues have nothing to do with enlargement. The case for a pause after the 2004 and 2007 enlargements is undeniable. EU27 will have to settle down, and sort out the constitutional imbroglio. However the plausible time horizon for any next major enlargement is many years ahead, maybe 2015, with various transitional arrangements pushing the real date in important respects beyond 2020 (e.g. for the labour market). The vague idea of ‘absorption capacity’ is better deconstructed into more precise and objective components such as the capacity of the EU’s internal market, labour market, budget, eurozone and institutional system to absorb new member states, society’s capacity to absorb immigration and the EU’s capacity for assuring its strategic security. All these issues can be discussed, but they are not static matters. Changes in public opinion may be expected to follow from new realities. The dynamics of enhancing capacities for change deserve priority attention. The ‘final frontiers’ proposition (presumably to the exclusion of both Turkey and Ukraine at the least) is a thoroughly bad idea, since there are well-established outer limits in any case to the map of Europe (e.g. Council of Europe membership) and to EU membership as in the Treaty of Rome. It would be a strategic blunder for the EU now to invent a new irreversible dividing line within this map between ‘real Europe’ and an imagined ‘other’ (uncivilised?) Europe beyond. The term ‘absorption capacity’ should be dropped from use in official texts, unless deconstructed into objective elements. Otherwise it is giving the impression of some pseudo-scientific and static reality, and plays into the hands of populist political rhetoric.