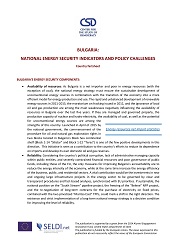 Author(s): Specified No Author
Subject(s): Politics / Political Sciences, Politics, Social Sciences, Economy, National Economy, Supranational / Global Economy, Energy and Environmental Studies, Sociology, Economic policy, International relations/trade, Security and defense, Economic development, Socio-Economic Research
Published by: Център за изследване на демокрацията
Summary/Abstract: The country factsheets present a critical review of the energy security governance in Bulgaria, Romania, Serbia and Ukraine, and map the main policy challenges faced by these countries in facilitating more transparent and data-driven decision making. The national and regional energy security of Central and Eastern European (CEE) countries has become a hot topic of discussion in the EU recently, focusing the attention of experts, policy makers, and the general public on ongoing and future energy projects but also on the features of energy governance in these countries. The fragile democratic traditions in the CEE countries, the existing networks of political protectionism and economic oligarchy, and the opaque business practices nurtured by corruption and links with organized crime, have been reinforced by the negative implications of Russian economic and geo-political influence. Russia has exploited its dominant position in the energy market and its long-term links with certain political and economic groups to shape political decisions across the region according to its own interests, but often to the detriment of the home country consumers. A major governance challenge for Bulgaria, Serbia and Ukraine is the lack of political agreement on a long-term national energy strategy with supporting financial instruments, which would lower the ad-hoc decision making, often related to suspicions of being influenced by private political and economic interests. Romania championed the group in terms of good energy governance due to the improved independence of the national energy regulator with the adoption of new legislation in 2012, as well as due to the continuing overall strong performance in the fight against corruption in the country. The governance of the state-owned energy enterprises in CEE is heavily influenced by political interference, distorting their investment independence and regulatory oversight. This is particularly visible in Bulgaria and Ukraine. The politically mandated downward pressure on electricity and gas prices in Bulgaria, Romania, and Serbia increases further the vulnerability of their energy sectors. The heavy dependence on a single source and route of gas supply is the major energy security risk for all countries. In Bulgaria and Ukraine, it is coupled with heavy dependence on oil import from the same country – Russia. While Romania, Bulgaria and Ukraine have undertaken diversification efforts, Serbia seems to favour the status quo, even at the expense of paying one of the highest wholesale prices of natural gas in Europe.