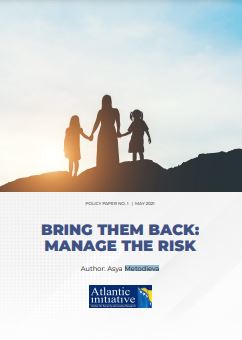 Author(s): Asya Metodieva
Subject(s): Security and defense, Military policy, Peace and Conflict Studies, Asylum, Refugees, Migration as Policy-fields
Published by: Atlantska inicijativa: Udruženje za promicanje euroatlantskih integracija BiH
Keywords: Islamic state; security; military; return; Balkan states;
Summary/Abstract: Local and international media continuously tell stories about people who, after having joined the Islamic State (IS) a few years ago, cannot return home from Syrian camps. These stories display the security dilemma that European governments have to deal with: how to manage the risk? By banning IS nationals from coming back home and not taking any responsibility for them, or by repatriating and prosecuting them? Balkan countries have also faced this dilemma in recent years. More than 1000 men, women and children from this region traveled to Iraq and Syria between 2012 and 2016 (See Table 1). 1/3 of them were killed, 1/3 have returned, while 1/3 of them are still there. In February 2021, UN human rights experts made a new call for states to repatriate their citizens from the camps in northeastern Syria. Two years after the IS “caliphate” was defeated in Syria and more than three years after the fall of the last IS territory in Iraq, 13,500 foreign women and children remain in camps held by the Syrian Democratic Forces (SDF). There are also 2,000 male foreign fighters in prisons in Syria. It is hard to estimate the exact number of foreign terrorist fighters (FTFs), as some of them have dual citizenship and others have already had their citizenship revoked deprived of their nationality. They represent around 60 different nationalities. The prosecution of Balkan FTFs has been seen as problematic for several reasons. The first is the governments’ reluctance to repatriate their citizens. As there is no international framework stipulating how states should tackle the issue, countries in the region have taken individual approaches. In addition, governments in Europe show no political interest in repatriating their citizens, which has made Balkan countries more reluctant. Second, data on individuals who are still in Syria is contradicting. Many people in the camps are undocumented: either lost, or they have destroyed their passports. This, combined with limited administrative capacities, mean the Kurdish authorities have failed to provide comprehensive information concerning FTFs’ nationalities. There is a likelihood that a number of IS members lied about their countries of origin for various reasons, including an unwillingness to be repatriated, or no longer identifying with their home country. In addition, there are many children who were born in the warzone but still do not have citizenship anywhere. Third, governments in the Balkans are not able to provide reliable information either, as they have a limited capacity to collect information themselves directly in the camps and prisons. Countries whose citizens are still in Syria often have little more than estimates based on data from several sources: the Kurds, US intelligence, families, and open sources shared by international organizations with access to the camps. There are practical, operational, and legal challenges, as multiple actors are involved in collecting frontline evidence, including military personnel, the Commission of inquiry Syria (CoI), UNITAM (the UN investigation team), and specialized NGOs. Consequently, there are prosecution challenges related to the lack of evidence. Local authorities do not always possess information on every individual who committed a crime in Syria. There are further questions concerning the success of reintegration programs and the capacity of Balkan countries to implement them. National counter-terrorism policies point to prisons as a particular type of environment in terms of both the risks of radicalization and opportunities for deradicalization. On the one hand, a prison is a place, in which individuals with no previous experience in politically motivated violence could be exposed to radical ideas. On the other hand, a prison could be a venue for a ‘peaceful change and transformation’. Peter R. Neuman lists several operational purposes of a prison when analysing radical actors: this is where terrorists form networks, develop strategies, establish hierarchies, and plot attacks. There are significant differences among countries in Europe concerning the processes and procedures following the release of an extremist offender. Some lack an integrated approach towards prison and probation.