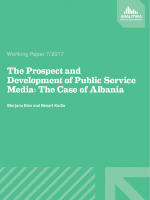 Author(s): Besart Kadia, Blerjana Bino
Subject(s): Politics, Media studies, Communication studies, Transformation Period (1990 - 2010), Present Times (2010 - today), Public Finances, ICT Information and Communications Technologies
Published by: Analitika – Centar za društvena istraživanja, sva prava pridržana
Keywords: Albania; media; public service broadcasting; prospects;
Summary/Abstract: Following the collapse of the communist regime in the early 1990s, contemporary Albania has been undergoing a series of economic, social, and political transformations. Such encompassing transformations affect, among other things, the role of media in society and in the democratic processes, particularly the public service broadcasting (PSB), which, in principle, has the potential to contribute to democratic advancements in post-communist countries. The aim of this research paper is to investigate the current and future developments of the Albanian Radio and Television (RTSH) by analysing dimensions such as politics, policy and regulation, market and financing models, digitalization and technology development as well as socio-cultural issues. The specific objectives of the research are: (i) to explore the PSB challenges and future perspectives in the political and socio-economic context in Albania: post communism; democratization; EU accession; liberal reforms and free market; new social and cultural trends; and (ii) to propose recommendations for the future perspectives of PSB in Albania to respond to the contemporary developments in the country. The research is relevant both in terms of media policy and developments in Albania as well as for similar research conducted within media studies. First, the research is significant in terms of policy developments since it provides a comprehensive analysis of the current state and future perspectives of rtsh. This comes at a time when there is a growing interest in media developments in the event of digitalisation and intense proliferation of information and communication technologies (ICTs). In addition, debates on the future of PSB are important in light of the democratic processes in Albania and its EU accession. PSB reinvention and repositioning is to respond to the contemporary social, cultural, political and economic developments in Albania. Media and democratization as a research topic is relatively underexplored in Albanian media studies, which corresponds with the claim of Rupnik and Zielonka that mass media remains one of the poorly understood factors in the new democracies of the former Eastern bloc. Within this, public service broadcasting is neglected as a topic of research. Additionally, Voltmer points out that mass media have been largely ignored by mainstream democratization research in spite of the fact that media are playing a paramount role in the democratic processes. Following Hallin and Mancini’s note that research on Eastern European media systems is still in the process of emergence, lacking original research, this research on the case of Albania aims to contribute to the systematic and comparative analysis on PSB and media systems in the Western Balkans (WB). This research relies on qualitative methodology. Through analysis of primary and secondary data, and conducting in-depth interviews with media professionals, scholars and policymakers and the explorations of existing studies, reports and publications on media in Albania, the research analyses the current developments and future challenges of the transformation of Albanian Radio and Television into a public service broadcaster. The research questions are: What is the current situation of PSB in Albania? What is the policy framework on PSB: laws, regulations and institutions? What is the PSB position in the media market and the financial model? Where does PSB stand vis a vis technological advancements and digitalization? What are the future perspectives and challenges of PSB in Albania? The research concludes that the transformation of rtsh to a genuine public service media has to be done by taking in consideration the political, economic and socio-cultural context in the country. It is naïve at best to assume that rtsh in Albania can be detached from politics in a country like Albania with a high level of politicization marked by continuous all-encompassing confrontation between political parties. It is also not realistic to expect journalists to adhere to Western European professional journalistic standards, which are isolated from the conditions in which they work in Albania, such as lack of labor contracts, constant political pressure, self-censorship, financial instability, low level of adequate professional development, to mention but a few. Therefore, to provide recommendations for a deep and multifaceted transformation of the PSB in Albania, it is important to understand the complexity of the context. For rtsh to fulfill its remit as serving the public interest and to survive in a fiercely competitive media market, its transformation into a public service media is a viable option, which implies the use of online media tools to embrace the opportunities offered by media convergence. This will enable more transparency and quality programming; attract the audience and be responsive to the future prospects of Albanian society. The next chapter offers a theoretical and methodological background by outlining some of the key international debates on the future developments of public service broadcasting. This will be followed by an analysis of these debates in the context of new democracies such as in the Western Balkans. The research methodology will be outlined along with the challenges of the research. The third chapter focuses on the case of Albania by offering a description of the political, economic and social aspects that are relevant to the debate on PSB. This chapter will look into the major features of the media landscape in Albania as well as the background of the PSB, such as its history, organization and regulation. The fourth chapter will outline the findings of the research followed by discussions in relation to the conceptual framework. The final chapter provides conclusions and recommendations on how PSB should be developed in Albania.