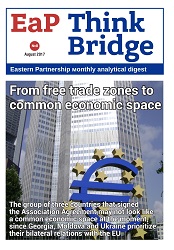 Author(s): Richard Giragosian, Ahmad Alili, Arseniy Sivitsky, Lasha Tughushi, Daniela Gologan, Oleksii Krysenko, Yurii Vdovenko
Subject(s): Regional Geography, Governance, International relations/trade, Present Times (2010 - today), Peace and Conflict Studies
Published by: PIC Promotion of the Intercultural Cooperation
Summary/Abstract: While the countries of the Eastern Partnership are not ready to act as a united region politically, there does not seem to be too many obstacles for launching a pragmatic economic cooperation or even a common economic space. Those countries already signed the Association agreement with the Euro¬pean Union should be in the avant-garde of such an integration. However, in reality Georgia, Moldova and Ukraine are once again more concentrated on the bilateral track of relations with the EU. Furthermore, these countries have yet to enjoy the advantages of the Free Trade Area with Europe as of now. The prospects of the common economic space within the frames of the Eastern Partnership were examined by a Ukrainian expert Yurii Vdovenko. Meanwhile, the traditional political peace and quiet in the region was not a feature of this summer. July and August turned out to be unusually hot for all six countries. In Azerbaijan the first lady Mehriban Alieva is getting more political weight, this may mean that there is finally an opportunity for a major power change in the country. As for Armenia, a fight to become a prime-minister with new powers as a result of the soon-to-be political system transforma¬tion continues, however, no official statements have been made yet. The rest of the countries were concentrated on their foreign policy games. Belarus, while still experiencing Russian pressure, chooses to put its eggs in several baskets. Georgia hopes to get back on track of the USA interests after Mike Pence visiting the country. As for Moldova, it had to explain the changes made to the electoral system to the Western partners. While Ukraine hosted a number of the important visits and events, however, not resulting in any significant changes. These and other important developments in the region can be found in our analytical reviews. //// CONTENT: ARMENIA: A SUSPENSEFUL SUMMER // AZERBAIJAN: POLITICAL CHANGES TO COME? // BELARUS: BETWEEN “HELSINKI-2“ AND “ZAPAD-2017“ // FIERY SUMMER IN GEORGIA // MOLDOVA ON THE EDGE OF DEMOCRACY // UKRAINE: UNUSUAL ACTIVITY INSTEAD OF SUMMER RECESS // ANALYTICA; FROM FREE TRADE ZONES TO COMMON ECONOMIC SPACE