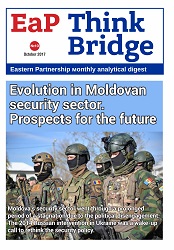 Author(s): Richard Giragosian, Vugar Bayramov, Yuri Tsarik, Lasha Tughushi, Victoria Bucătaru, Oleksii Krysenko, Danu Marin
Subject(s): Regional Geography, Civil Society, Governance, Present Times (2010 - today), Peace and Conflict Studies
Published by: PIC Promotion of the Intercultural Cooperation
Summary/Abstract: A bold statement made by the President of Moldova who declared that the state is neutral and therefore does not need an army at all, yet again drew attention to the security sector in the Eastern Partnership countries. The defense sector has long been on the fringes of attention as it did not promise considerable political dividends. Budgets of the armed forces were cut, and reforms were postponed. When it comes to Moldova, its usual reasons for an Eastern Partnership country to put off major changes were aided by domestic contradictions between the President on one side and the government along with the Parliament – on the other side. How Moldova is moving towards reforming its defense institutions, who stands in its way and which lessons can be learnt in the process by other countries of the Eastern Partnership – all these issues were addressed by Danu Marin from Foreign Policy Association of Moldova. In Belarus the army was in the spotlight as well: a death of the conscript instigated a new round of contradictions between security forces. Armenia as well decided to pay attention to its defense sector and in Oc¬tober it passed a law that changes the draft call, at the same time increas¬ing the spendings for the Armed Forces in the new budget. Meanwhile, the meeting of the presidents of Armenia and Azerbaijan was a new attempt to solve the conflict in Nagorno-Karabakh by diplomatic, and not military means. Ukrainian diplomacy demonstrated a positive result: with the support of Turkish partners, Crimean Tatar Mejlis leaders, that had been convicted by occupational Russian authorities in the Crimea, were released. As for Georgia, the main battles of the month took place in political fields, where «Georgian Dream» in fact won this fight for almost monopolistic local power. Our traditional reviews include all the main developments of the month in the region of the Eastern Partnership. //// CONTENT: ARMENIA: TENTATIVE RETURN TO DIPLOMACY // AZERBAIJAN: HUMAN RIGHTS IN THE SPOTLIGHT // BELARUS: FIGHTING FOR OPERATION SPACE // GEORGIA: LOCAL RISE FOR GEORGIAN DREAM // MOLDOVA: A SETBACK ON REFORM AGENDA // UKRAINE: NEW HOPES FOR OLD PARTNERS // ANALYTICA: EVOLUTION IN MOLDOVAN SECURITY SECTOR. PROSPECTS FOR THE FUTURE