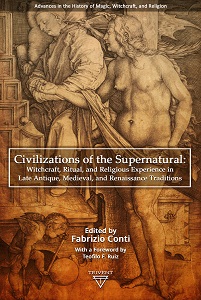 Author(s): Attilio Mastrocinque
Subject(s): History, Ancient World, Theology and Religion, History of Religion
Published by: Trivent Publishing
Summary/Abstract: The Dodekaoros is an astrological system based on twelve symbolic animals, each one representing a form of the Sun when approaching a particular constellation and zodiacal sign. This system was used for horoscopes. Its origin has no certain chronology and is known from the late Hellenistic Age thanks to the Babylonian astrologist Teukros. Nevertheless, the system was probably older and seems to be rooted in the Egyptian speculations about the different forms of the Sun God. Its use in some magical papyri and gems is studied here by taking also new data into account. In particular, we will review the Papyri Graeca Magica (thereafter PGM) IV, 1644-1649, XXXVIII, 1-26, reporting the Dodekaoros with an orientation (with the cat in S-E), and III, 500-535, where καν[θάρου should be read and not καμ[μάρου. Two features will prove particularly useful in our research: the orientation of the system and the nocturnal part of the animal series. Several animal forms of the Dodekaoros also appear on magical gems, where they are placed in the cardinal points. In PGM II, 103-40 and on a magical gem, the Sun has 4 four forms in the different quarters of the sky and – this system can be understood only if we remember that these forms depend on the Dodekaoros and if we place one half the forms beneath the Earth, during the night; moreover, in PGM VIII, 6-11 four animals of the Dodekaoros are displaced into the four cardinal points. Some series of magical gems represent five animal forms of the Dodekaoros repeated thrice in order to depict the lower, the middle, and the upper parts of the world. These iconographies were aimed to represent the solar god in his variety of forms with his related influences over the world. This chapter will first study the meaning of the Dodekaoros, then its descriptions in magical papyri with or without orientation, and finally it will analyze several magical gems.

Book: Civilizations of the Supernatural