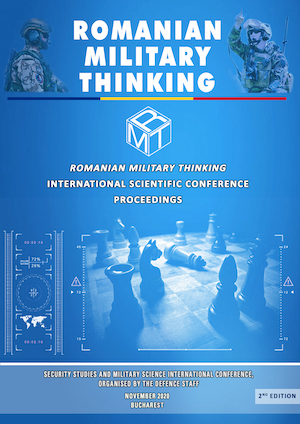 Author(s): Gabriela Sarbu, Vasile Bogdan
Subject(s): Security and defense, Military policy
Published by: Centrul tehnic-editorial al armatei
Keywords: biological factors; disarmament; protocol; microorganisms; critical technologies;
Summary/Abstract: In the first half of the twentieth century, the humankind experienced two devastating global conflagrations that caused millions of victims. The killer vectors were the destructive effects of f irearms and, to a lesser extent, death was brought by terrifying actions utilising combat gases and biological agents. During the Cold War, the great military powers of the world continued their efforts to produce, develop, and store biological means meant to secure their victory in future wars. As a result, the spectrum of biological threats had to be reduced, and relaxation measures were taken. The Convention on the Prohibition of the Development, Production, and Stockpiling of Biological Weapons and Toxins and on their Destruction, a document signed in 1972, has the undeniable merit in this respect. However, it must be acknowledged that this Convention was not the first step taken. Previously, in 1925, the Protocol for the Prohibition of the Use in War of Asphyxiating, Poisonous and Other Gases, and of Bacteriological Methods of Warfare was signed. Although the effectiveness of this Protocol was low, the importance of such initial agreement is huge, as it opened the road to biological disarmament, and to increasing trust among nations. Arguably, following the severe Covid 19 pandemic, the 1972 Convention needs measures, policies, and actions to substantiate the desire of powerful states to gradually and totally eliminate biological arsenals worldwide.