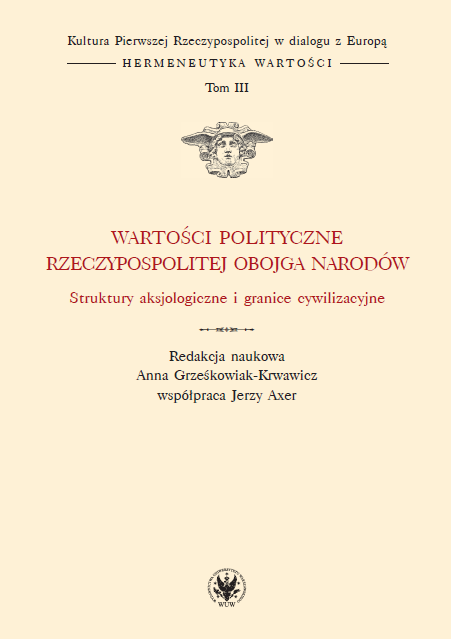 Author(s): Jolanta Choińska-Mika
Subject(s): Cultural history, Studies of Literature, Middle Ages, 6th to 12th Centuries, 13th to 14th Centuries, 15th Century, 16th Century, 17th Century, 18th Century, Philology
Published by: Wydawnictwa Uniwersytetu Warszawskiego
Keywords: public life of the First Republic; political culture; political journalism; state; community of citizens
Summary/Abstract: The authors present the political values functioning in the Polish-Lithuanian Commonwealth – primarily, but not only, in the community of politically active noble citizens. They try to recreate them on the basis of a thorough analysis of various sources – treaties and political journalism, public speeches at the Sejm and regional councils, but also unofficial statements, private exchange of views between participants in political life. The subject of the analysis is, inter alia, the ideal of the state as a community of citizens present in the political discourse, as well as the contemporary vision of a man-citizen, a member of the political community, and his obligations towards it. The authors also present and interpret the then understanding of the concepts of homeland or patriotism, and devote a lot of attention to the fundamental values of the political life of the Polish-Lithuanian Commonwealth, such as law and freedom. They show the analyzed issues not only in a broader European context, but also in different epochs, which allows to follow the evolution in the understanding and evaluation of political concepts and ideals. The 12-volume series of monographs „Kultura Pierwszej Rzeczpospolitej w dialogu z Europą. Hermeneutyka wartości” presents the cultural heritage of the 15th and 18th centuries as an integral but original part of European culture. The research goal is to identify the ways and forms of the mutual transmission of aesthetic, political and religious values and to present in a broad, multilateral comparative context the axiological structure of Polish culture of the past epochs. Cultural texts are examined from an internal perspective as records of acts aimed at understanding values, and from an external perspective as statements that join European literary-aesthetic, political and religious discussions. In an intense dialogue, the culture of the Republic of Poland shows not only a receptivity to new ideas, but also creativity and dynamics of action in Europe.