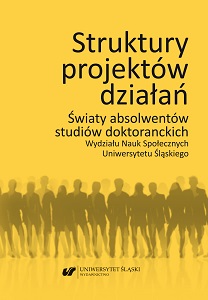 Author(s): Anna Karendał
Subject(s): Sociology
Published by: Wydawnictwo Uniwersytetu Śląskiego
Keywords: generalized others; role figures; three types of doctoral students
Summary/Abstract: What was the image of the doctoral studies of their later graduates, before they took them up? Did it turn out to be in line with reality? What or who inspired the students to make this decision and what did they expect from it? Is there a set of common aspirations and basic characteristics of this group? – These are the questions I seek to answer by identifying two elements that significantly influence the design and implementation of the social action in question: the context of predicted events, aspirations and values, and the category of generalized and meaningful others.Therefore, I look at the original plans and initial assumptions concerning doctoral studies, which were constructed by the researched graduates before they began their studies. This allows for the identification of three leading goals of the study, which can be called, ranking them according to the popularity of indications as ideological, cognitive-scientific and ennobling. They can be assigned to three types of doctoral students, whom we have described as idealists, pragmatists and those seeking recognition. The decision to take up third degree studies is also influenced by the social environment of the respondents, in which generalised and significant categories of others can be placed. Graduates cite here examples of their role figures, among which there are, in particular, people of science, personally known to the respondents, but not belonging to their family circles. The key, however, turns out to be the master-student relationship, in which the supervisor occupies an extraordinary place.The assumption of this part is also an attempt to characterize the expectations towards doctoral studies. As a result of the conducted interviews, two leading types of expectations are revealed, which result from two different attitudes presented by the respondents. These include: searching attitude (“selfsufficient”) and conservative (“student”) attitude. However, regardless of the represented type of approach to studying, the interviewed graduates perceive doctoral studies as a process in which one of the most important goals is personal development.