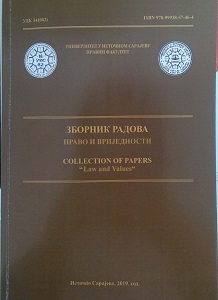 Има ли места реформи законског наслеђивања у праву Републике Србије?
Is There Any Room for the Reform of Intestate Succession in Serbian Law?

Author(s): Nataša Stojanović
Subject(s): Law, Constitution, Jurisprudence
Published by: Правни факултет Универзитета у Источном Сарајеву
Keywords: Intestate succession;Blood relatives;Spouse;Cohabitee;Inheritance Fund;
Summary/Abstract: The author’s attention is focused on certain solutions in the domain of in- testate succession in Serbian law, with special reference to relevant rules from legislative praxis of contemporary legal systems within European legal space. This research has been conducted with an aim to find argumented answers to the following questions: Are domestic rules, dedicated to the line of intestate succession, adapted to what happens in reality most commonly? Are the solutions that standardize intestate succession specified and precise enough to prevent different actions of courts in identical disputed situations? To what extent are domestic regulations in the domain of intestate succession close in their contents and aims to relevant regulations in European legal systems?For the purpose of this paper, the following methods are used: legal-dogmatic, normative-legal, comparative-legal, and historical-legal methods. Starting from a long-established Roman law regula that the application of law is the aim and the use thereof, the author in her paper proposes a reduction of the circle of blood relatives that might be invited to inherit, up to and including the third line of intestate succession, along with the full application of the right of representation and the establishment, as in Swedish law, an Inheritance Fund. The author advocates for strict adherence to the principle of fairness and recognition the spouse’s right, as the heir of the first line of intestate succession, to demand the increase of the legitime due to lack of necessary funds for life. The author, instead of an imprecise and undefined provision, contained in the Serbian Law on Inheritance, on the spouse’s legitime reduction, as the heir of the second line of intestate succession, suggests, by reference to Hungarian law, a solution about the spouse’s right to get the testator’s property, which they had acquired from their blood relatives by the way of gift or inheritance, to usufruct and to establish the right of ownership on the remaining property of the deceased. Whereby, the protection of extended family must also be implemented consistently in regard to the heirs of the third line of intestate succession. By reference to Russian, Czech, and Slovak laws, the author advocates for respecting the fact of support provided by the testator, as well as for recognizing the right to inherit to a cohabitee in creating a line of intestate succession. In the author’s opinion, the differences that exist in standardizing a line of intestate succession in the states within the European legal space would not facilitate the harmonization of inheritance-law regulations, but they might help in regulating individual situations in domestic law.