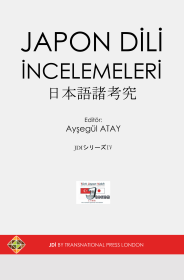 Author(s): Devrim Çetin Güven
Subject(s): Education, Studies of Literature, Other Language Literature, Transformation Period (1990 - 2010), Present Times (2010 - today)
Published by: Transnational Press London
Keywords: 21st century alternative postmodern Japanese literature; women’s studies; postcolonial studies; postmodern history;
Summary/Abstract: The 20th century ended with the dissolution of systems based on “modernist” ideals. Although the 21st century was considered to become the construction process of a unipolar but multibase, decentralized, harmonious “new World”, it began as an era of crises of terror, war, refugee issues reminding Huntington’s twisted prediction entitled “the clash of civilizations”. To these were added major economic crises and ecological disasters such as tsunami and global warming. These crises deeply affected Japan, which is one of the important actors of the new world order, especially at the socioeconomic level. In response to such national and international crises, in Japanese literature it was observed several efforts of settling accounts with the past on the one hand, and grasping the “present” on the other. To grasp and express these phenomena a new language, a new style and an entirely new imagination were needed. Indeed, the most predominant feature of 21st century Japanese literature is the reception of postmodernism at theoretical and artistic levels. The prominent figures of this new postmodern literature have been such experimental writers as Tawada Yōko, Levy Hideo, Ikezawa Natsuki and Seirai Yūichi who skilfully articulated the national-international crises, and the individuals’ reactions at them. In our article, we named this literary style as “alternative postmodern Japanese literature” and focused on three specific works: Ikezawa Natsuki's novel Burden of Flowers (2000), Seirai Yūichi’s short stories Ground Zero— Nagasaki (2006) and Kobayashi Takiji’s novella Crab Cannery Ship (1929) that was rediscovered by readers in 2008. We aim firstly to explain the originality of this sui generis literary current, then to demonstrate how postmodernism was received by such writers as Ikezawa and Seirai, or how such theories were anticipated almost a century ago, as is the case in Kobayashi’s text, finally to put forward suggestions about how these literary works with such features may contribute to the education of Japanese language.