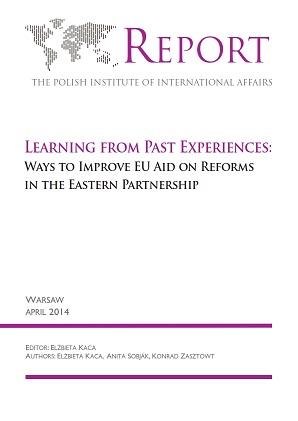 Author(s): Elżbieta Kaca
Subject(s): Supranational / Global Economy, Economic policy, Government/Political systems, International relations/trade, Economic development, EU-Accession / EU-DEvelopment, Fiscal Politics / Budgeting, Geopolitics
Published by: Polski Instytut Spraw Międzynarodowych
Keywords: European Union; EU aid; sector budget support; financial aid; Eastern Europe; pro-European governments; EU-oriented countries;
Summary/Abstract: The EU approach in the Eastern Partnership countries is to financially support concrete reforms: sector budget support operations are most commonly in use. Theoretically, such a tool, given teeth by precise conditions and indicators, should allow the smooth completion of the sector integration planned in the scope of the EaP. In practice, an analysis of the first years of use (2007–2013) shows that this instrument has potential in countries willing to integrate with the EU, while in the others its use has limited impact on guiding comprehensive reforms. The pace of fulfilment of budget support conditions differed much among the partners. This resulted mainly from the various level of willingness of the EaP governments to conduct Euoriented reforms. For Moldova and Georgia, the political will to integrate with the EU is clear, as proved by their determination to sign an AA. On the contrary, Armenia and Ukraine withdrew from signing such deals, a step that confirmed they were not interested in or were hesitant about EUbacked reforms. In Armenia, the EU had to stop support for DCFTA implementation and reshape its assistance, whereas for Ukraine the new pro-European government has signed the political part of the AA after an internal crisis. Azerbaijan is a case apart, as budget support was aimed to develop sector cooperation, but in the meantime it has shown it is not interested in complying with aid conditions on PFM: in this case, the EU help is rather useful in terms of advice on the directions of some reforms. Therefore, one can distinguish two groups of countries, EU-oriented and non-EU-oriented, with the latter being interested only in some sector cooperation.

Book: Learning from Past Experiences: Ways to Improve EU Aid on Reforms in the Eastern Partnership