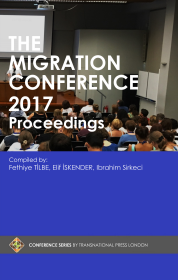 Author(s): Seher Selin Özmen
Subject(s): Archaeology, Geography, Regional studies, Ancient World, Cultural Anthropology / Ethnology, Migration Studies
Published by: Transnational Press London
Keywords: Aegean Migrations; Ionia; Mother Goddess; Cybele; cult;
Summary/Abstract: “Migration” has been an important concept for explaining social and cultural change throughout the history of archaeology. Religion, on the other hand, as an important medium for the interaction of different societies and cultures, has been one of the main results of migrations. In antiquity cults spread through different geographical areas by trade, wars and migration. The immigrants brought their beliefs to the new lands and also, they adopted the local cults. During the 12th and 11th century B.C., a large-scale immigration called “Aegean Migrations” occured from Eastern Europe and Balkans to Anatolia. While the first wave of the Aegean Migrations was a movement of discovery the second peak period caused radical changes with the Ionian, Aeolian and Phrygian settlement in Anatolia. The Phrygians who came from the Balkans to Anatolia destroyed the Hittite State and settled in the Kızılırmak River basin. While The Aeol tribes settled between today’s Çanakkale-İzmir shores, the Ionians established a union of twelve city-states between 900-700 BC. These cities were Miletos, Myus, Priene, Ephesos, Kolophon, Lebedos, Teos, Klazomenae, Phocaea, Samos, Khios, and Erythrai. An Aiol city, Smyrna, later joined the union. Ionia had the most glorious period between 650 and 494 BC. Ionian Golden Age came to an end when Miletos, the leader of the union, was occupied by the Persians in 494 BC. However, it is proven in the inscriptions that the union continued its life till the 1st century B.C. When the Ionians came to Anatolia they met the Mother Goddess Cult who had been prayed for thousands of years. The Goddess was given the title of “Matar / Mother” and her characteristic features were created in Phrygia. The recognition of the Mother Goddess Cult in Ionia can be explained by the relations with Phrygia. The purpose of this presentation is to reveal with the archaeological finds that the Ionians, who came to Anatolia with the Aegean Migrations adopted the Mother Goddess Cult Cybele and they added their own cultural characteristics to her.