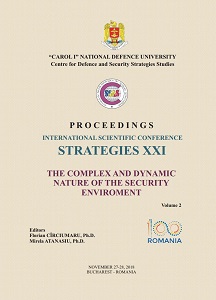 Author(s): Diana Cristina Lupu, Gligor Vaidean
Subject(s): Politics / Political Sciences, History, Civil Society, Security and defense, Developing nations, Politics and society, Politics and Identity
Published by: ”Carol I” National Defence University Publishing House
Keywords: patriotic guards; people’s militia; combat groups of the working classș
Summary/Abstract: The paper presents the alternative national defence and security structures,be they considered public security organisations, official governmental paramilitary structures or militias, existing in some countries during the Cold War period, focusing on the situation in Romania and the Balkans. The presentation is contextualised, taking into account the tensions between the Eastern Bloc (the Soviet Union and its satellite states) and the Western Bloc (the United States of America and its allies), divided along ideological lines after the end of the World War II, the existence of the two main political-military alliances(the Warsaw Pact and NATO), as well as the main crises and phases in the Cold War, in general, and in the Warsaw Pact, in particular. In the mentioned context, in some countries,certain structures other than the regular military were established to provide additional defence in the event of outside attack, the emergence, organisation and role of the ones related to the Eastern Bloc, especially those in Romania and the Balkans, being presented in the paper.