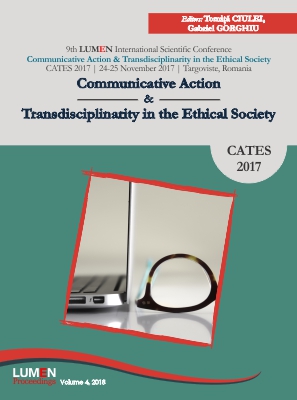 Author(s): Otilia Stamatin, Viorica Adascalita
Subject(s): Essay|Book Review |Scientific Life
Published by: Editura Lumen, Asociatia Lumen
Keywords: tolerance, personality; high school pupils; emotional features; self-attitude; motivation; formative experiment
Summary/Abstract: This work is authors’ expression on essence of tolerance as a moral quality of a personality, reflecting the attitude of people to the multidimensionality of the world, diversity of cultures and uniqueness of the individual as supreme value and most important condition for the coexistence of people and self-realization of everyone, manifested in understanding the unity of the world and the interdependence of people, in recognizing the principle of complementarity, in recognizing the equality of individuals in society and their right to self-expression, the desire and ability to understand and accept the other, implementing the principles of partnership. We ground the idea that preadolescence is the sensitive age for forming this feature. We introduce outcomes of the tolerance development level study at high-school adolescents and tolerant and non-tolerant psychological profile of people. We demonstrate that the central element of tolerance is the understanding and recognition of the value of the diversity of the world and people in all their manifestations, the value of different opinion, view, position and culture. A decisive role in tolerance manifestations is played by subject’s attitude to something or someone. Tolerance manifestations also depend on subject’s skills, primarily communicative ones. It was revealed that increasing tolerance level is facilitated by the ability to control own emotions, to dose them; flexibility, development, expressiveness of emotions; domination of positive emotions; desire to approach people on an emotional basis; positive self-perception and self-attitude; developed intellect, strong "I", diplomacy, self-sufficiency; moral-business orientation of personality. The work briefly introduces the formative program aimed at a comprehensive impact on students’ personality and the outcomes of its implementation, witnessing a significant increase of adolescents’ tolerance level, enabling to reach positive changes in the emotional, motivational and value spheres and in the personality of senior pupils in general, contributing to the effective formation of tolerance.