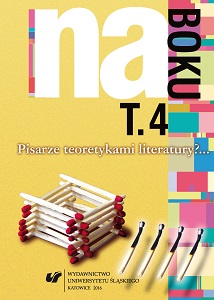 Author(s): Piotr Sadzik
Subject(s): Language and Literature Studies, Literary Texts, Studies of Literature, Philology, Theory of Literature
Published by: Wydawnictwo Uniwersytetu Śląskiego
Summary/Abstract: The present article undertakes the reading of the works by Witold Gombrowicz,primarily of Ślub (The Marriage) in the context of the attempts at the critical evaluation of “political theology”, considered as a hidden structure of modernity. Attributing to the notion of “state of emergency” the role of the basic axis around which the writing of the author of Kosmos (Cosmos) continually evolves, the author of the present article thereby attempts to demonstrate that the most important feature of Gombrowicz’s world is the radical obliteration of the clear‑cut boundaries between law and lawlessness, norm and exception, etc. The work by Gombrowicz, making use, among others, of the Baroque drama matrix, in a perfect, although unconscious way, fictionalizes the theoretical remarks of Walter Benjamin fromhis The Origin of German Tragic Drama, and other polemics with the work by Carl Schmitt. Considered from this point of view, the work of the author of Ślub (The Marriage) turns out to be an endeavour to develop different modernity, i.e. such that neither seeks transcendent legitimizations, nor trusts immanent, radical disenchantment.On this basis one could also discern the trace of “postsecular” ethical moment, which seems to constantly haunt the writings of Gombrowicz. Taking into account the fact that the task of disarming the political‑theological doctrine constitutes one of the most important elements of philosophical projects of such thinkers as Giorgio Agamben, Jacques Derrida, or Roberto Esposito, the writing of Gombrowicz appears to be still a remarkably valid, fascinating, and insufficiently recognized philosophical project.